The Tiny Squid that Pretends It's the Moon 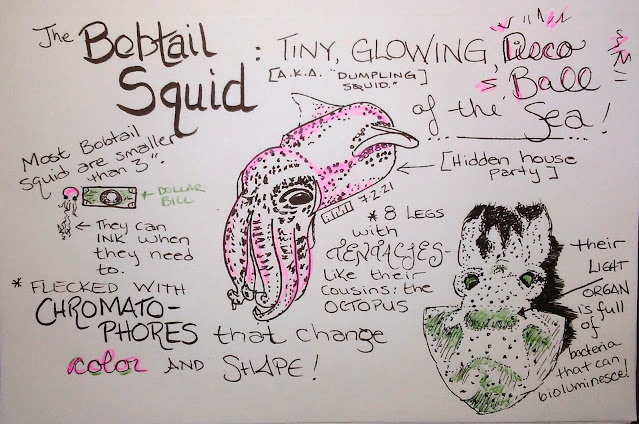 The bobtail squid are tiny little ocean denizens. Some have a mantle as small as half an inch and most are less than 3 inches long -- just the right size for some fish's tasty snack. These tiny things prefer to live in open water with strong currents, so you'll rarely find them in captivity in any but the most specialized of aquariums.

In many ways, these stubby squid are similar to cuttlefish, though they have no cuttlebone (so: not cuttlefish, then) and a rounder mantle (the large blobby part of their body).  Bobtail squid are classified with coleoidea, which includes squid, cuttlefish, and octopus, but this classification is, evidently, a hot-button item currently under debate by those who know far more about these creatures than I.

In addition to all the cool things coleiods have, including eight little legs with suckers on, two tentacles, the ability to swim by jet propulsion, and ink, these little "dumpling squid" have two other nifty attributes.

Firstly, their entire body is rife with chromatophores, a sort of shape-and-color-shifting freckle dotting the squid. The chromatophores pulse and change producing an ink-spreading or kaleidoscope effect.

And they also have a light organ. Which is about the coolest thing ever. This light organ, located deep inside the blobby head-like mantle, is a gated housing community for a specialized type of bacteria. (Vibrio fischerii, in case you were wondering. Which you probably were. Now you know.)

Baby bobtails hatch from a clutch of eggs. When the newly-hatched squidlings hit the water, they are immediately surrounded by fischerii, which infiltrate the squid's body, swimming through thick mucous-like gunk, along a highly specialized series of tunnels, into the squid's light organ. There they set up housekeeping and remain in residence throughout the little dumpling's life. It is the start of a beautiful relationship.

V. Fischerii and the bobtail squid have a symbiotic relationship. The light organ fills with a solution high in glucose and amino acids that is perfectly calibrated for the bacteria.

Safely ensconced in the light organ, the bacteria feed on the solution and begin to glow. If they glow, so does their host. The bacteria's bioluminescence affects gene regulation in the squid's light organ, allowing the squid to ability to tinker with the feeder solution to control the light it emits.

You would think that a brightly glowing squidly glob would be akin to an "EAT HERE" neon sign for predators. Ah, but don't be so quick to leap to conclusions, Sparky.

Essentially, the light from the little squid perfectly simulates moonlight or starlight filtering through the ocean. This counterillumination renders the squid virtually invisible while keeping it from casting a shadow.

Lit up like a dance party, the tiny bobtail squid puts on a show that mimics the moon. Of course, if the party gets too raucous and the light becomes a bit too bright, the squid can always hit the "emergency ink" button and dim things enough to swim away so it can live to glow another day.

Posted by Ami Hendrickson at 8:28 PM