Julius Caesar in Under 50 Words

Because Shakespeare's play, written in 1599, about events that happened in 44 B.C., continues to be relevant, provocative, and news-making (every writer should be so lucky)...

And because it is clear to me that a staggering number of people are discussing Julius Caesar without having the foggiest idea what the play is actually about...

And because every once in awhile I like to take a break from writing and dabble in drawing, if only to prove to myself that my talents lie elsewhere...

I present: The Illustrated, Annotated, and Abridged Shakespeare's JULIUS CAESAR, in less than 50 words, with additional Cliff's Notes-like salient points after the text: 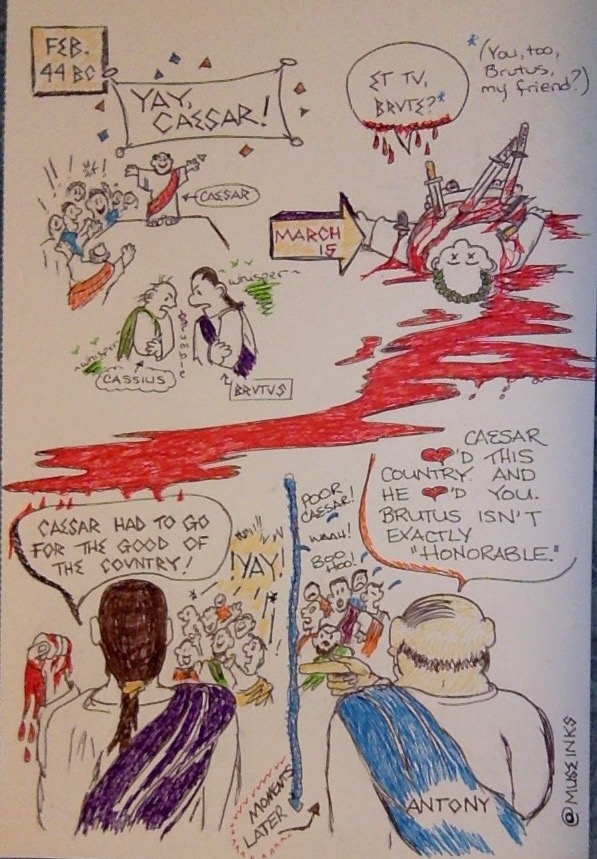 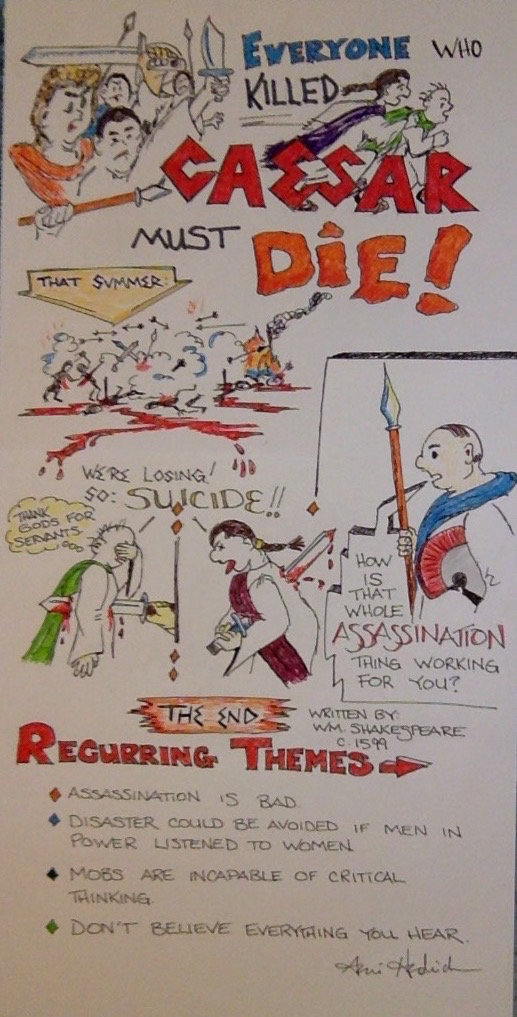 Posted by Ami Hendrickson at 8:48 AM No comments:

Last Sunday, I took my dad out to the Mason Jar, the tastiest eatery in Berrien County. The place was packed, as we expected, so we browsed the adjacent artists' shops while we waited for our table.

When our time came, we took our time as we enjoyed a wonderful meal. When I picked up the tab, I said, "Happy Father's Day, Dad."

We headed back to the car and came back to our homes.

I thought about my daughter, who has no father to celebrate this year. Also, since two of my uncles have passed away in the past three months, many of my cousins are newly fatherless.

I thought about how fortunate I have been to have a great dad -- one who may not share my political views, but who shares my odd sense of humor (and, really, that's often more important).

When I was growing up, he always made sure to schedule his time off so we could all take a family vacation, spending solid amounts of quality time together as we traveled North America.

He and Mom welcomed WunderGuy with open arms when we got married. I think he misses Robert nearly as much as I do.

My dad has been married to my mom for 53 years. For the past 3 years, Mom's dementia has grown increasingly pervasive. She is now locked in her own unreachable waking dream, whimpering to herself and barely able to interact with the real world. Yet, every day, Dad goes and visits with her, spending hours by her side, making sure she eats a good lunch, listening to the radio, and doing crossword puzzles while keeping her company. Dad lives his love.

Later last Sunday, when I got on Twitter, I was mildly surprised that Father's Day wasn't trending. The world is changing, my inner curmudgeon grumbled. Nobody makes much of a fuss over parents anymore.

And then... Because not a single person on my timeline had anything dad-oriented to say, the teensiest suspicion began to niggle at me.

He started laughing. "You're kidding!" 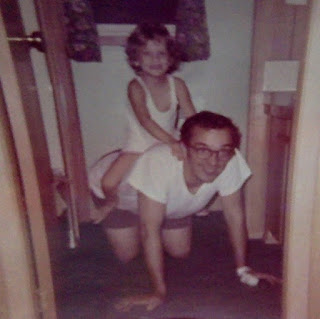 As I related this story to my friend Stacey, she snorted. "You and my dad are in the same time warp. He gave me grief for forgetting him today. Didn't believe me when I told him it was next week..."

Well, now it IS next week. Now it IS Father's Day. I shall celebrate again with my father. We shall go to Dairy Queen and indulge in the wonder that is hot fudgey delightful dairy goodness.

We might do the same thing next week, too. 'Cause some dads deserve more than one Father's Day. And I'm lucky to have one of those dads.
Posted by Ami Hendrickson at 12:30 AM 1 comment:

I've been meaning to post an update for what feels like a lifetime. Some days I'll even log on -- then I'll see my last post, my final tribute to WunderGuy, and I'll feel all the energy drain out of me.

Nothing I want to write seems appropriate for The Next Post. Compared to losing Robert, everything seems trite. Unimportant. Frivolous.

I thought of closing up shop -- shutting the blog down and calling it quits. Some days I could muster no answer to the question of "What's the point?"

But there is an answer: Life goes on.

I can't be blog blocked forever. Robert may be gone, but the world continues to spin. So I'm going to take Robert's fix-all tech-guy advice. Whenever I would get stuck and grumble with frustration (I can grump with the best of them, let me tell ya), he would ask: "Have you tried turning it off and turning it back on?"

For the past 6 months, this blog has been turned off. Now it's time to turn it back on.

This summer, God willing, I've got plans to launch another blog. And maybe a newsletter (further bulletins as events warrant). This will remain up and running, but it's going to go through a makeover.

By my estimate, there are roughly 13 bazillion blogs and websites out there that dispense writing advice. More power to them. In the near future, I'm going to spend some time archiving and culling a lot of the posts from the past 12 years. I'll leave some of the most popular ones up. (This post on "How to Write a Foreword," for instance, is one of the first things you see if you Google the question. It'll stay.) I'll also continue to help new and struggling writers in my workshops and at Write2TheEnd. But I'm going to blog less about the writing process and more about the way-cool stuff I keep running across in my research for various writing projects.

[Lately, I'm all about runaway slaves in eighteenth century America and Pickett's Charge at the Battle of Gettysburg. Oh, and historical UFO sightings. Research FTW!]

So this post kicks off life post-WunderGuy. It's greyer. Lonelier. Some days feel like they are encased in fog, cloying, thick, and heavy. But there are good things, too. A partial list of Things That Make My World a Better Place:

* My kid. She is awesome and funny and lovely; she laughs at my jokes and joins in on loud, word-tripping renditions of the "Hamilton" soundtrack. Plus, she rocks the tiny kitty headband like no one's business.

* Dogs. Mine (I've got four -- all essential for my health and well-being) as well as others'. Kestrel's dignity, River's enthusiasm, Zephyr's devotion, and Major's pure silliness make every day worthwhile.

*  Friends. Friends who brunch, breakfast, and lunch are invaluable. So are the friends who share their cool artistic talents, who shame me into going to the gym, and who indulge in over-eating sugar-based foodstuffs to counteract that whole gym nonsense.

*  Sunshine. Do not mock me. I live in Michigan. We do not take the Golden Orb for granted. Rather, we celebrate it when it makes an appearance.

*  Chocolate. And raspberry sherbet. And Hot Tamales. And anything salted caramel or toffee.

*  Coffee. Some days all it takes is a hot cuppa to make life worth living.

*  Creativity. No one lives forever. But when we're gone, the work remains. Plus, nothing matches the creative high. Nothing.

Maybe you're in a place that could use a little life rebooting too. Maybe you feel like you've been turned off and are ready to power back up. If so, why not try making a list of things that make your world better? See if it helps you. And feel free to add to my list. We're all in this together.

Keep on keeping on. Here's to reboots...