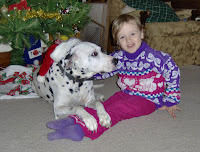 So far, August has been a Season of Change. To begin with, we had to say good-bye to Digory, our 11-year old Dalmatian. (Here he is with Cassandra, Christmas of 2006 -- a happier, healthier time.)

Dig' developed a sodium imbalance and went into renal failure. After several hundred dollars in vet visits, we realized that there was really nothing that could be done for him. He was depressed and wouldn't eat. When he collapsed one morning while Robert took him for their daily walk, we knew the time had come. So we said our goodbyes, and he went on a "one-way trip to Disneyland," at the vet.

For nearly 20 years, there has been at least one dog in our home.

Dig' was a "special needs dog" when he came to us, emaciated, injured, malnourished, and abused at 6 months of age. He eventually grew accustomed to the other dogs and cats we had at the time, but we were never successful in introducing any new animals to him -- he became extremely territorial and aggressive.

So, by attrition, when our other dogs and cats passed away, we were unable to bring any more into the fold.

It was odd coming home for the first time without Digory there. The heartbeat of the house is very different without a dog inside. That, coupled with my feeling that losing him was the equivalent of disconnecting our burglar alarm, made getting another dog -- soon -- a priority.

Which is why we now have Sera. Sera (short for M'Lady's Seraphim) is a sweetheart of a girl. She's an English Mastiff puppy who "only" weighed 18 pounds at 11 weeks of age. What a little gem.

My friend Wendy says that Sera is God's way of blessing us for ever raising a Dalmatian puppy. She's referring to Bogie who, compared to the laid-back attitude of Lady Large-Bones here, looks like a hyperactive teenager on crack.

I can distinctly remember Bogie at this age. I'd just brought him in from outside. I thought, "He just peed. He'll be fine." So I left the puppy alone while I literally ran upstairs to the restroom, and returned to the livingroom.

In the short time I was gone, Bogie had eaten our recliner. Right down to the metal and wood.

Sera, on the other hand, is all dignity, composure, and grace. She needs lots of socializing, and she needs to learn to like the outdoors as well as the indoors. (She's spent the first part of her life inside, I gather. She's not terribly pleased when there is only sky over her head. She much prefers a ceiling. We're working on it.) But she's as sweet and willing to learn as they come. We're looking to a long, happy life together.

Earlier this week, I discovered a blog with a review of Dr. Warson's Pain-Free Back book. The writer has encountered some spinal issues, and had some very kind words to say about the book. It's always gratifying to learn that a project I've worked on has touched someone.

I've signed a contract to work on a new book. I'll be working with Ryan Gingerich, "the Behaviorist," of Connective Horsemanship. The book is due out sometime in 2010, and I've just begun to assemble Ryan's notes. Further bulletins as the project progresses.

And, in the mother of all "Bittersweet Endings" and "New Beginnings," my little girl starts kindergarten tomorrow. Words fail to describe how I feel. I'm so pleased, and proud, and full of love and admiration for the beautiful little person she is becoming. And I'm so worried, protective, and concerned for her at the same time.

So many questions arise at this time: Will she make good choices in friends? Will she be a follower or a leader? Will the other kids want to play with her? Will she continue to love learning as much as she does now?

Part of me just wants to keep her home and home school her. But the other part (the smarter part) knows that school isn't just about learning "book stuff." It's about developing important social skills. And making friends. And learning that the sun does not really rise and set on you. All of which are important for one to live as a contributing and balanced part of society.

It's a good thing that our children grow up and live their own lives. As parents, its our job to equip them to be worthwhile, connected, empathetic human beings. We want them to be strong, resilient, and dependable. But that means leaving us behind while they grow into a person that is completely separated from us.

And so, tomorrow, I'll drop my little girl off at school as August's Season of Change continues...

Posted by Ami Hendrickson at 4:03 PM