Words For Worried Writers: Answering the Question "Am I Wasting My Time?"

"I may need a bit of encouragement. I've queried fifteen agents -- two asked for partials, then rejected after a lengthy time. Others outright rejected the manuscript. Now I am wondering if I am wasting my time. Should I move on to something new? Did I kill my book before it even had a chance? I believed in my beta readers who said it was ready, and I think that's what bothers me most."

These questions, in some form, are the most commonly asked ones in the Writer's Realm.

It may have something to do with an industry that requires me to spend days researching an agent's likes, dislikes, sales record, social media presence, online interviews, and current client roster, and to spend at least an hour filling out their personalized form (Who is my favorite Muppet, and why? What song am I most likely to sing out loud in the shower? Hmmmm), only to receive a "not for me" reply in less time than it takes for me to refill my coffee cup.

I asked permission to share this writer's email and my response to this and every other unsure / underappreciated / self-doubting / anxiety-ridden / apprehensive creative soul out there standing at the precipice of a Career in the Arts and wondering "Can I do this thing?"

Here’s the short version: You want a career in writing? Buckle up for a LONG HAUL.

Writers are called. We start out writing a story or a book, looking at it like we’re going to run a 5K on a weekend. Then people start warning us of “marathons.” Those people are wrong.

A writing career is not a marathon, which is over in a few hours. It's more akin to circumnavigating the globe. It is a lengthy, exhausting, imperfect, messy, unfair process. You are at the very beginning — at the starting gate. If you give up easily or are readily discouraged by what others say, quit now. Seriously. I cannot overestimate how hard the process is. 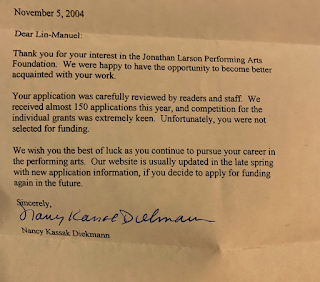 If you’re like me, and the other writers I know, it’s because you must. You have a story to tell. You love telling stories.

And you’re not going to let the querying odds (fewer than 1 in 1000 queries get an offer of representation), the money (the vast majority of published writers must work at another job to make ends meet), the rejections (Lin-Manuel effing Miranda was rejected for arts grants only 15 short years ago), the naysayers (“The Great Gatsby,” which is considered a classic and is one of my favorite books — the book that made me want to become a writer — tanked when it was released. It never became “successful” until after its author’s death, when the publisher cleaned out their backstock to send cheap reading material to soldiers in WWII), or your own inner voice derail your dreams.

As long as you love what you are doing, you are not “wasting your time.” Think of all those poor saps out there who have no North Star passion.

Your betas encouraged you. They weren’t wrong to do so, but they probably know jack about publishing. Don’t blame them. We all need fans. Put them in the “fan” category and turn to them when you need cheerleaders. 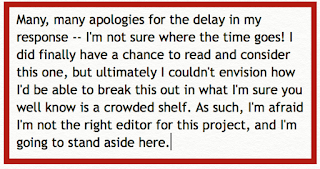 The people who work in publishing will often not be as encouraging as your betas were. That’s why my goal for all my clients is to work on a project and polish it until it is as good as we can possibly make it, every word has fought for the privilege of remaining in the manuscript, and you love it.

Realize that once the project finds a publisher, you will rewrite it again with the editor — your Publication Sherpa.

It is entirely possible that this book may not be the one that lets you break into publishing. (“Carrie,” Stephen King’s first published book, was his seventh manuscript, I believe. He was so discouraged that he threw the draft in the trash, but his wife dug it out and encouraged him to keep going. Even so, over 30 publishers rejected it.) But the tools you learn from working on it will apply to your next book. And your next. And your next.

Your book is hardly dead. There are hundreds more agents to approach when its time. Fifteen agents is *nothing*. And they were right to reject it. It was nowhere near ready to query.

My job, and the job of any other writer you ask for help at this stage, is to help you get your book query-ready. We won't lie to you. We'll help you identify your weaknesses and point you toward the tools to fix them. When it's ready to query, we'll join your beta-fans and cheer you on every step of the way!

Chin up! Soldier on!

[Of course, I had no sooner replied to this writer than I noticed that Don Jr. announced a publishing deal. Because of course. ::sigh:: In this TED Talk, I will discuss...]


tl;dr ~ Yes. You can do this thing. You will fail along the way. Get used to it -- especially if you are not a member of the Automagically Privileged Elites (APEs). If you can actually walk away and leave your creative soul unexplored, do it now. If you can't, then suck it up and get to work!
Posted by Ami Hendrickson at 8:45 PM No comments: