Not long ago, I received a phone call from a woman I'd met earlier this year. During our initial meeting at our local library, I'd offered some advice on breaking into the publishing world. We talked about things like crafting query letters, composing punchy pitches, and pitching projects.

I did not read her project (a young adult novel) or comment on it. I scanned the first few pages enough to see that she knew how to put words together, and knew a thing or two about punctuation. Our meeting didn't focus on the writing -- it was more about what to do with what was written.

It appears that she went right home and worked on what we'd talked about. (Side note: I can't tell you how gratifying it is when someone asks for your advice -- and then follows it.)

She called to let me know that a BIG agency had responded to her query and requested the first three chapters of her manuscript. She had a few questions about proper format -- but mostly, she was just excited. And she wanted to say "thanks."

I told her how proud I was of her, and told her to let me know when she'd landed an agent and sold the book.

No one knows it all. And -- praise God! -- we don't live in a vacuum of isolation. We all need mentors. We need people who are willing to point out the path we should follow.

How can you tell if you need a mentor? Five sure signs:

1.) You have done your best, and have progressed as far as you are able to on your own.

3.) You are ready and willing to learn.

4.) You are ready and willing to act on what you learn.

5.) You are ready to stretch yourself, but you need someone with experience to help show you the way.

If you exhibit all five signs, you owe it to yourself to find a mentor willing to help you grow.

No one can make us follow a particular path, or use information that's been given to us. And no one can walk the path for us. But I'm always grateful when someone who's a little further up the publishing ladder is willing to give me the benefit of his or her experience. And I'm happy to help people who might be able to learn from what I know. The magic is in realizing that we're not on this trip alone.
Posted by Ami Hendrickson at 10:39 AM No comments:

When the Raptor Comes

My husband and I returned home near dusk. We were met at the driveway by a squawking, terrified chicken, running about as if she’d had her head cut off. I thought perhaps I’d left the gate to the chicken pen open and headed over to see what was the matter.

The gate was firmly closed, but the entire little flock was twitterpated. As I approached the fence, I saw the problem: an enormous raptor – a rough-legged hawk – in the pen with my chickens! He flew off as I approached, but he took his time doing it. His huge wings spread out and sent the birds into new paroxysms of terror. 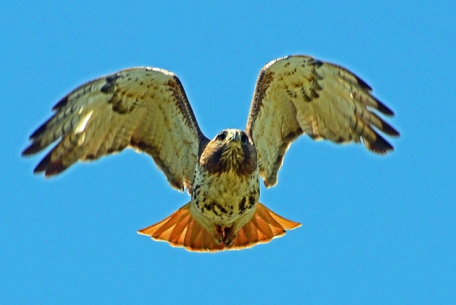 Inside the coop, the oldest chicken (a 4 year-old Barred Rock who has been going through a most embarrassing molt) cowered in a corner. Her breathing was too fast, and her eyes were closed. I saw no blood or signs of a struggle. She had simply shut down and was waiting for the end to come.

Since chickens will often keel over and die from a heart attack after a stressful situation, I fully expected her to be gone by the end of the day. Surprisingly, however, after 15 minutes or so in a near-comatose state, she stood up, stretched, ascertained that the executioner was NOT nearby, and ran out of the coop as if nothing had happened.

While the hawk terrifies my chickens and could destroy them, he is not really a nuisance to me. I often see him at the back of our property when I am riding, and he never fails to inspire awe. He is magnificent. Just having the opportunity to see something like that is one of the reasons I love where we live.

But there is no denying the fact that he is a real menace to the chickens. They are not equipped to deal with him. They would literally rather die than confront him. They cannot see the beauty and power that he holds. They will never soar where he does.

Ah – of course there is a lesson in all this. When the raptor of success comes knocking at your door (and it will, if you give it half a chance and put yourself in a position to encounter it), will you be inspired to reach within yourself and rise to new heights? Or will you cower in a corner, give up without fighting, and wait for the end to come?

I once did a book edit that ended up becoming a total rewrite because of such a raptor. The original writer was so impossible to reach, I dubbed him He Who Will Not Call. His representatives informed those of us working on the book that Himself simply could not be burdened with any more work at this time. He was going through a Difficult Period. He was Very Busy. He was indisposed.

Things got so bad, the publisher was forced to send all communications via certified mail just to verify that HWWNC received the materials.

Regardless of whatever reason for why He couldn't respond to my content questions, all I could see was that giant hawk circling overhead. If HWWNC would have seized the opportunity to rise to the challenge, the manuscript could have been completed in a matter of weeks. (As it was, it took months. Many, many months.) Himself’s part would have been finished. All he would have had to do would be to wait for the royalty checks to arrive.

Instead, however, he probably only saw the amount of work still to be done. And since he had never written a book before, the task must have looked as daunting as an Araucana hen fighting off a bird of prey. So he chose to give up – to cower in a corner in the coop and pray for a swift end, so we'd all stop bothering him with editorial questions.

There’s a lesson here, and it’s an important one. When you agree to tackle a new project – something you’ve never done before… something that scares you… something that will force you to learn new things in order to finish it -- decide at the outset how you will face the inevitable challenges that arise.

Will you crawl into a hole and refuse to come out until all possibilities of success have passed, thus making your fear of failure a self-fulfilling prophecy? Or will you find a way to find the strength to leave the confines of the comfortable behind you and soar toward success?

Happy flying…
Posted by Ami Hendrickson at 6:30 AM