Spinning the Story Wheel: the First, Best, and Last of 2018

I just spent the past three minutes trying to maneuver my cursor to delete a backslash ("/") from a document I'm editing.

Turns out it wasn't a backslash at all. It was a piece of flotsam on my computer screen.

Story of my life, eh?

Last year about this time, I posted The Annual Extra, resolutions of sorts for 2018. I was going to start a newsletter about cool stuff I've read, interesting factoids I came across in my research, and whatnot. I actually did this thing. (You're a subscriber, yes? Thanks!) Newsletters post infrequently, but -- and this is key -- they do happen.

Unlike, say, the other resolutions I made. All of them fell by the wayside. ::sigh:: I've come up with a foolproof approach to New Year's Resolutions this year... which I explain in detail in my next newsletter.

Unrealized resolutions aside, 2018 flew by in a whirlwind of activity and experiences. One of those experiences happened last night.

Our friends invited us over for dinner. Several others were there who we didn't know well. After we ate, we played Storyology, which involves telling stories about random topics. On the first round, everyone tells a story about their first ____. Second round involves stories about the best ____. Final round is a story about the last ____. The game ends as everyone, in turns, recalls details of the previous stories. It was a genuinely lovely way to spend an evening.

In the vein of Storyology, I'm going to tell a few stories about 2018. (AKA: The Year Few Things Went As Planned).

* Since Cas took Driver's Ed this summer, I now have a chauffeur. Not only is she a first-time driver (and a fairly good one) but this is also the first time since 1996 that I have not been the only driver in the family.

* I went ziplining for the first time this summer in Denali Park, Alaska. Cas (who doesn't like heights) went, too, but she had been before, at summer camp.

* I lost my voice -- completely -- for nearly a week. Nothing hurt; I wasn't sick. I was just mute. Gave me new appreciation for those who have difficulty speaking. Trying to make myself understood to salespeople or on the phone was a nightmare.

* I wrote my first romance novel this summer. Romance is not generally my chosen genre, but I thoroughly enjoyed the experience. Even more surprising: I quite like the finished project. Better still -- so does my agent. (Whew!) 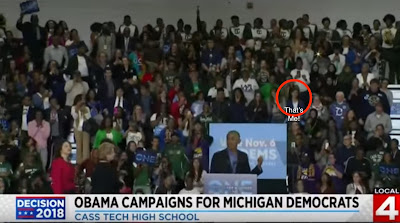 * Attended my first political rally AND got seated with my friends in the "behind the speakers / gonna be on TV" section. I was this far away from Obama! The last president I saw in person was Ronald Reagan when I was working for our college newspaper. This was way better.

The BESTS of the Year:

* Best trip: went on a two-week vacation / cruise to Alaska with Cas and my friend Stacey. Saw whales, sea lions, bald eagles, and more. Went on the afore-mentioned ziplining adventure. Also went horseback riding in Denali, which was on my Bucket List.

* Best news: that Dad would be ok. He got critically ill while we were on vacation and spent most of the summer in the hospital (including 2 weeks in ICU) and in rehab. Today he is 90 lbs. lighter than he was last year this time, and in far better shape. Thank God!

* Best live entertainment: Cas was in her high school's production of "Hello Dolly!" Which was phenomenal. Truly. I'm not saying that just 'cause I'm the mom. I went to every show and loved every moment.

* The last book I read was Pratchett and Gaiman's GOOD OMENS, which was, of course, excellent.

* The last trip I took was to Hollywood in November, for the annual Tobias Agency Retreat. While there, I got to meet up with some old friends, which is the highlight of any trip. Had a great room, met some amazingly talented people, and the pièce de résistance: was treated royally at a French Consulate 'do.

* Last two movies I saw were "Mary Poppins" and "Spiderman: Into the Spiderverse." Liked them both. Not a bad way to spend a few hours in December.

* Last colossally stupid thing I did was a week and a half before Christmas, which resulted in 15 stitches in my top lip. I don't want to talk about it...

* And THIS is the last post of 2018. I'd love to say I've made a resolution to blog more, or to be more consistent, but you and I both know that I would just be blowing smoke. I'm looking forward to the next year; lots of writing and editing projects ahead, just waiting for me to dive into them.

Here's wishing you the best of everything in 2019. May it hold many memorable stories for you.

Posted by Ami Hendrickson at 2:02 PM No comments: