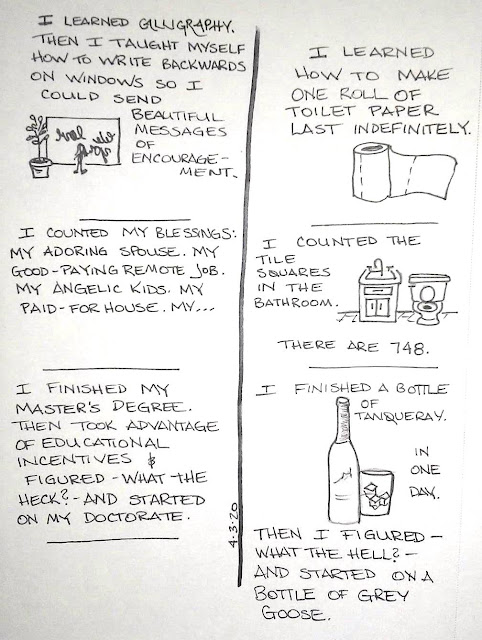 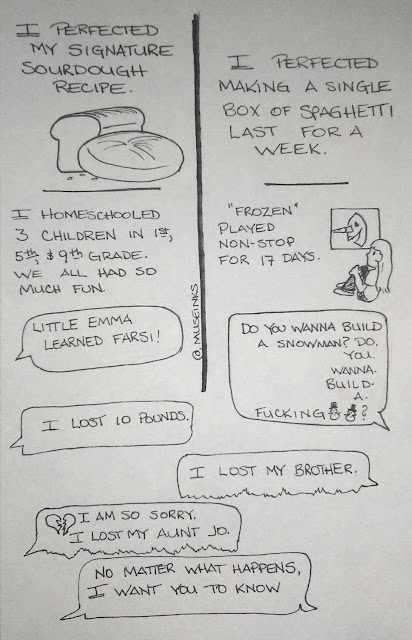 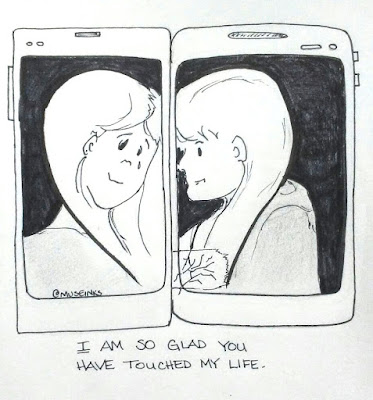 Stay inside.
Stay safe!
Wash your hands.
Tell those you love what they mean to you.
Posted by Ami Hendrickson at 9:29 PM No comments:

I don't usually use this blog for recipe posts (my exploration of some of my Grandma's recipes was an exception, rather than the rule). But I can't stop telling everyone about this bread and how easy it is to make. 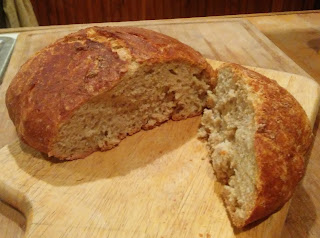 Since many people are trying their hand at baking as they self-isolate to keep the Coronavirus at bay,  I had to share. (And since I loathe those recipe blogs that take six days of anecdotal storytelling to get to the point, I'll just skip to the good stuff.)

Step 1:
Dump all ingredients in a large bowl.
Mix with a spatula or wooden spoon until well combined.

No need to knead.

Step 2:
Cover with plastic wrap and set aside to proof at room temperature for 3 to 5 hours. Instead of rising, like typical bread dough, it will look more like a gummy, pillowy porridge.

Step 4:
Sprinkle dough with 1 to 2 Tbsp. flour. Using a wooden spoon or spatula, work dough into a self-contained ball.

At this stage, you can add a few tablespoons of old-fashioned oats as an optional 6th ingredient. Just sprinkle them over the dough and roll it a bit so they stick. (I didn't do that this time.)
Tear a large square of parchment paper. Place dough in center of paper. Place paper back into bowl.

When oven is hot, place dough (parchment and all) in hot Dutch oven. Cover and bake at 450 for 30 minutes.


Step 7:
Cool completely before cutting and eating. (From start to finish, the hardest part is waiting for the bread to cool before cracking it open...)

This recipe is (mostly) taken from "Faster No Knead Bread" via Jenny Can Cook -- a 7 minute how-to video version of the process. Share and enjoy!

Posted by Ami Hendrickson at 12:59 PM No comments:

Sketch Notes: One Way to Help Focus Attention For Sermons and Online Learning

(Future readers [if, indeed, there is a future], please note: this blog post was written at the beginning of the COVID-19 / coronavirus pandemic. Michigan, along with most of the free world, is shut down. Grocery stores are devoid of toilet paper and hand sanitizer. Schools, churches, restaurants {::sob!::}, salons -- all closed. The times, they are *weird*, and only expected to get weirder.)

As the realities of quarantine settle in, the name of the game right now is Online Learning, which involves parking on the couch in your PJs, nibbling on a stale bagel, trying to stay focused on the tiny talking head on your screen that is attempting to enter your home via the internet in order to impart knowledge into your noggin.

One thing I've noticed: the older I get, the more easily my attention wanders. Especially during lectures. Even lectures that I want to pay attention to.

Though I no longer spend a lot of time in the classroom listening to lecturing professors, I do spend a significant amount of time in church. And though it pains me to admit it, if all I do is sit and listen, I have a mortifying tendency to ... dozzzzzze offff... ~ZZZzzzzzz~

Or, rather, I *did.* Until I started taking sketch notes as a way to focus my attention and absorb the information coming my way. Not only did they stop me from falling asleep, but when I return to them -- even months later -- I find myself readily remembering the source content.

Now that so many religious services are being held online, not to mention business meetings and educational classes, it occurred to me that perhaps sketch notes can help others as well.

There are three primary purposes of sketch notes.

One is to give your hands something to do to keep you engaged while your brain focuses on whatever words are being said. Doodles, patterns, drawing things in close proximity (since most of these examples were drawn in church, that explains the sheer number of sketches of the backs of people's heads). The sketch doesn't necessarily have anything to do with the content of the lecture, but it does anchor you to the place and time.

Another is to jot down important data. Write out verbatim quotes and references that are important or that you want to be able to revisit for further study at another time.

The third is to make intuitive jumps between what was said, and what you got out of it.  (See the party limousine contrasted with the "Jesus Prius" as part of the story of calling Matthew, for instance...)

The purpose of sketch notes is not to take down extensive content verbatim. Rather, it is to find ways to encapsulate the information or anchor it in your mind for later recall when you revisit the sketched pages.

All you need for sketch notes is a sketch pad and a writing utensil. Artistic talent is irrelevant (as you can plainly see in the accompanying photos).

I find that too many options (say, a complete array of colored pens or pencils) is too distracting. With so many choices, instead of concentrating on the information coming my way, I'm deciding which color is best to work with.

For me, my "sweet spot" is a pencil, a pen, and a marker. Those three mediums are enough to provide a nice variety without overwhelming me with choices. Your actual mileage may vary -- do what works best.

I like to start with a date, so I can quickly locate a particular note at a later time.

When the speaker starts, I begin filling up the page, using one of the three methods mentioned earlier. Generally, I'll start a doodle and noodle around with it for a significant portion of the lecture -- but I'll often leave it to cite specifics or to note connections, then return to it as the lecture progresses.

That's what works for me.

The point is to use your sketching to help focus your thoughts on the new information coming at you. Whether learning online or in a more traditional lecture setting, fiddle around with sketch notes to see if they can work for you too.
Posted by Ami Hendrickson at 3:35 PM No comments:

After the Crash: Getting Unstuck and Back on Track

I haven't written in awhile. Months, in fact. Almost a whole year. 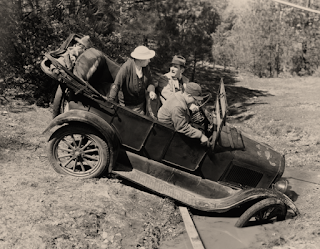 For awhile, I thought laziness was the culprit. But I think the real problem was The Rut.

For months, I explored pursuing several things, including starting my own publishing company, only to feel that I was doing nothing more than spinning my wheels and getting more and more stuck.

Recently, I came to the conclusion that now is Not The Time. I'm a single parent and an only child. The last thing I want to do right now is be the sole person responsible for One More Thing.

I had a conversation along these lines with one of my dear clients, a wonderful woman whose book deserves to be in print. "Do you feel like you're in Limbo?" she asked.

"It's ok," she said. "I've been there. The thing about Limbo is, it's only for a season. It's not permanent, though it may seem like forever when you're in it. But, like any season, it will pass and you'll come out the other side better and wiser for having gone through it."

I have the *BEST* clients. Just sayin'.

Her words were exactly what I needed to hear. They gave me the oomph I needed to slog on, to push forward, to keep reaching out in the hopes that I'd make some sort of progress.

Maybe they're what you need to hear, too.

If so, take them to heart, take them to soul, and make good use of them. Hopefully, you won't have to experience an in-your-face moment with your own mortality to further hammer home this truth, as I did.

Yesterday, Dad and I were at our Township Hall to vote in Michigan's presidential primary. We stopped by on our way to lunch and were surprised at how few people there were waiting to vote. Yes! No lines! W00t!

The building shook as if hit with a massive explosion. The wall buckled. Wood splintered. Bricks flew. The table that held voting materials shot across the walkway. In all honesty, at first I thought a bomb had gone off. Especially when the initial BOOM was followed by an ominous high-pitched whine.

It wasn't a bomb.

It was a car. Embedded in the wall, with the grille poking into the voting area. That whine was the accelerator still revving. Had it happened only a minute or two earlier, it would have likely smacked into both Dad and me. As it was, we were all supremely fortunate that no one -- including the driver -- was seriously injured. In fact, she said she intended to vote, just as soon as she had spoken with her insurance company.

As the dust settled, I helped to move some of the larger pieces of drywall to clear a path so we could get out and future voters could come in.

Adrenaline ran rather high as Dad and I went off to lunch at El Asadero. (It takes more than a little car crash to keep us away from Taco Tuesday.)

By the time our food had arrived, word of the accident had gotten around. (It's a small town. News spreads like wildfire.) 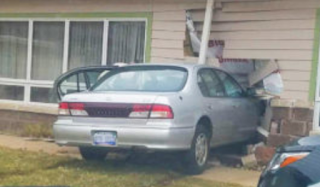 By the time we finished eating and headed home, the wreck had been cleared, the wall was in the process of being patched, and voting was continuing.

It does no one any good to dwell on the damage that's been done. What matters is not the Bad Stuff that happened. Rather, what matters is clearing away the debris and doing The Thing that needs done.

In the aftermath of the wall crash, I found myself energized. "Inspired" isn't quite the right word, but neither is "stuck" any more.

So I'm going to do my best to clear the debris, tow away the things that are blocking progress, and continue to press forward. The plan is to update things here regularly -- once a week at least, probably on Sundays. Definitely more than once a year.

If you're stuck in a similar rut: onward and upward!

With any luck, this season will soon be history. Here's to pushing ahead and getting back on track.

Posted by Ami Hendrickson at 8:47 PM No comments: