Juliet Brier: The Reluctant Heroine of the Death Valley 49ers

Last year for my birthday, my feisty friend and neighbor gave me a first edition of Women's Diaries of the Westward Journey, edited by Lillian Schleissel. It's a fascinating read that deftly treads the line between scholarly writing and narrative non-fiction.

One of the prevailing truths of the book is that the vast majority of women who traveled West in the mid-19th century did so unwillingly. The ones who signed up to make the trip on their own accord were rarer than easy river crossings.

It didn't matter whether they were healthy, pregnant, nursing, or tending toddlers. They left behind their friends, family, and familiarity because their husbands decided they needed to go West. When the man of the house decided they were going to go, they spent all of their time and resources amassing the equipment for the trip. Then, as soon as spring arrived, they hit the trail, in order to make it to their western destination before winter made the way impassable.

Intrigued by the book, I did some more reading on the westward pioneers, and ran across the story of
the amazing Mrs. Juliet Brier, by most accounts the first non-native woman to survive traversing Death Valley. Though most records say she was born Sept 26, 1813, her tombstone puts her birthday as April 8, 1814.

Married to the sickly, self-centered Rev. John Wells Brier, Juliet was tiny: she stood no more than 5' tall and weighed less than 100 lbs. The Brier's and their 3 children -- all under 8 years old -- took the Santa Fe Trail toward the gold in CA in 1849.

When they set out from Utah, their company had 100 wagons, 250 people, and a thousand head of horses  and oxen.

Soon, though, the men started arguing over the best route, which quickly split them into smaller parties.

Reverend Briar, who was notoriously judgmental, verbose, lazy, and self-absorbed, was especially struck with gold fever. Their party met up with the "Jayhawkers" of Illinois, a small train of about 20 wagons. When they learned that the Jayhawkers were following a sketchy new route that veered south, Juliet's husband and a handful of others insisted on joining them. 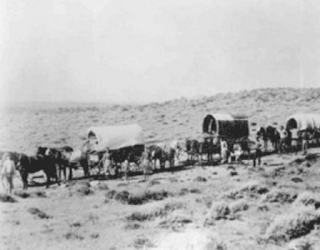 It was November. Snow clouds were common. Juliet advised against striking off into the unknown. But she was overrulled.

So, their little band of about 27 wagons turned off the fairly well-traveled and well-marked Santa Fe Trail...

...into a desert they would soon name "Death Valley".

Almost immediately, they became hopelessly lost. The "map" they had was incorrect. Several in their party turned back to rejoin the Santa Fe Trail. Not the insufferably stubborn Rev. Briar, though. So, of course, his family had little choice but to continue on with him.

Within days, they ran low on water. Rev. Brier and the other men went ahead to look for water, leaving Juliet behind with the kids, the wagon, and the cattle.

Brier did not return. Nor did any of the other men.

Darkness fell; the complete, utter darkness of the desert. The oxen picked up the scent of a watering hole and hurried on ahead.

Still, Brier did not return.

So Juliet parked her 4 year old boy on her back, then crawled on the ground, relying on starlight to help her look for tracks from the oxen. Around three in the morning, she discovered her husband and the rest of the men camped by a spring.

The men of camp decreed Juliette was too small and weak. They told her and the kids to stay behind and wait for the men to send for them once they found a way out. She delivered a sermon of her own, full of enough brimstone to nix any idea of them leaving her behind.

Accounts of surviving Jayhawkers unanimously agree that tiny Juliet was the one who kept the family alive. She yoked and cared for the oxen. She attended to her husband, who became quite ill as time went on. And the mothered her three little boys, keeping them alive and safe in dire circumstances.

Not one mention is ever made of her complaining. In fact, the only incident of her raising her voice involves an ox that got caught in muddy quicksand and sank chest deep. Juliet jumped in beside it and began shoveling the muck away with her hands. She essentially shamed the men into helping her get the creature to safety. 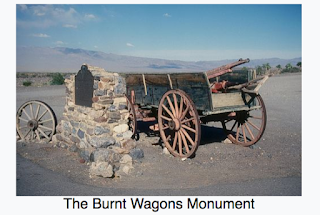 Provisions ran out, and still the desert stretched before them. Their Christmas "dinner" -- and most other meals -- consisted of bones boiled in blood. Juliet's husband lost over 100 pounds. Juliet herself was reduced to 75 pounds.

At what is now a Historical Landmark, they burned their wagons for fuel, cooked their animals & made jerky. Four people in their party died during the journey. But Juliet was relentless in her determination to survive.

Several eyewitness accounts speak of little Juliet walking over 100 miles through the Mojave desert with a child on her back, another under an arm, holding the hand of the third, and helping her ailing husband. 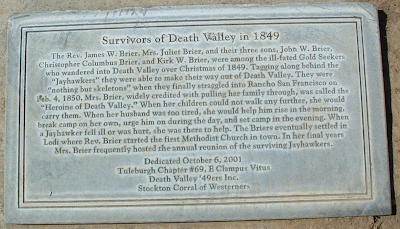 Thanks to Juliet, the entire Brier family survived. She and the self-absorbed Reverend had three more children (all girls). Juliet outlived all but one of her children.

She died a few months shy of her 100th birthday. She often hosted Jayhawker reunions, but loathed the taste of jerky and refused to eat or serve it after the Death Valley experience. 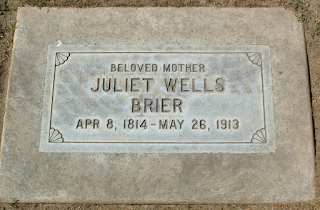 *  For those interested in more details: Here's a fascinating narrative non-fiction longread about the Jayhawkers.
Posted by Ami Hendrickson at 9:51 PM No comments: