Her blog posts frequently wax eloquent about the vagaries of her hobby and the subjective nature of showing one’s art in competition. They contain so many parallels to the Wonderful World of Writing that they made me realize how closely all creative endeavors are related – up to, and including, the occasional self-doubt that seems to plague every artistic soul. Though the medium may differ, the journey is the same.  Stacey’s passion for her art inspires me. I trust it will you as well… 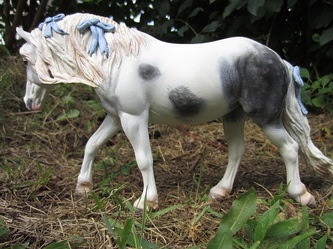 Q: How did you get started modifying, sculpting, and painting model horses?

A: I collected Breyer horses way back when I was a kid and I always loved them. Those horses are long gone. Back in 2008, I was on Ebay and I somehow came across a customized Breyer and was blown away with how cool it was. I was shocked to see how much money it was going for. I did a Google search, which lead me to various web sites, blogs, etc. and as they say, the rest is history.

Q: The model horse world has its own language and acronyms just as the publishing industry does. Can you provide a quick lexicon of common terms for those unfamiliar with the hobby?

A: Here's a quick summary.

Show holders can submit an application to NAMHSA (North American Model Horse Shows Association) to have their show NAN approved. This means 1st and 2nd place horses will get a NAN card and are eligible to show at NAN (North American Nationals).  You can get a card in Breed, Collectability, Workmanship, and Performance.

Q:  What are some of the things you have learned from your hobby?

A: I have learned so much about horses by showing. You have to know what colors are acceptable in certain breeds.  For example: no Appaloosa-like spots or blankets on Saddlebreds; no roan Morgans; and no buckskin Arabians.

I’ve also learned that you don’t have to be rich to be competitive. A lot of people spend big bucks on their models, but you don't have to. I bought a little Arabian stablemate for a buck at a horseshow because I felt sorry for it. I took him to a show and threw him on the table as a joke and he got 4th in a class of 20+ horses last year.

And, of course, I’ve learned that there is no such thing as a “sure thing.” Sometimes I find that the horses I think will kick butt don't place and the ones I bring just to put something on the table get the blues! 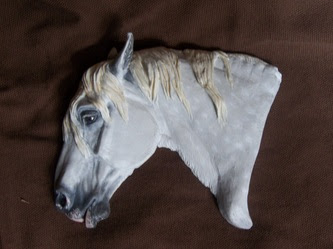 Q: What do you like best about working with models?

A: For me, my biggest thrill is taking a blank resin and transforming it to a lifelike horse.  Taking care to paint the markings in the correct growth pattern, detailing the eyes and hooves, achieving a realistic coat color -- it's GREAT!

I work in pastel pigments but some people work in oils or acrylics.  Pigments are pretty messy and take a lot of patience but I feel that medium gives the most realistic depth of color.

There are many steps involved in getting the horse ready for paint.  You have to sand/scrape off seams, you have to bathe the model in Ajax to get rid of any release that may be on the resin, and you have to put a coat or two of primer on it so your medium will stick. Crappy prep job = crappy model, so prepwork is important.  That is why I am so geeked whenever I get ribbons in workmanship classes.

Q: The process of submitting your work for judging is a bit like that of a writer submitting a manuscript for publication. How do you maintain a positive attitude in a highly competitive hobby?

A: I’ve been known to have a crisis of artistic confidence. It's nice to hear somebody other than your spouse / family likes your stuff. We all know that!  Nothing sucks more than to have a model up on the table that you've put your heart and soul into, and the judge doesn't even look at it. Aarrgh!

Then there is the cliquey thing. Nobody likes to admit it but if the judge knows you and likes your stuff, they'll pin you. Also, if it is a popular mold, done by a "big name artist," it has a pretty good chance of getting pinned. 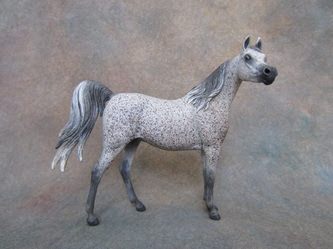 I think my biggest problem is I have high expectations. Perhaps too high.  I was talking with another hobbyist about "only" placing third. Woe is me!  Waaa!  She put it into perspective for me, telling me the class was large and there were some pretty big name painters on the table. She then went on to say she would have been thrilled with a third. That was my "A-Ha!" moment when I realized maybe I was being just tad harsh on myself.

I don't do commissions. Period. Too much pressure. What I do like to do, however, is donate items to shows, swap customs with fellow hobbyists, and sell stuff on Ebay once in a while. Though ribbons and sales are nice, they’re just the icing on the cake. The real fun is in bringing your vision to life, making something that has never been made before. I have a lot of ideas a-brewing and I can’t wait to get cracking!

Posted by Ami Hendrickson at 6:30 AM 3 comments:

Care and Feeding of "The Little Guy"

I have a writer friend who, while waiting for her big break (aren’t we all?), writes for various local publications in order to pay a bill or two.

(Interesting side note: writer's agents are also known to work a second or -- dare I say it? -- third job in order to make ends meet before one of their clients makes it big enough that the agent can eat something other than Ramen noodles. True story.)

But I digress. Back to my friend:

She was on assignment at a local winery’s wine tasting, doing research for a small regional publication. The owner of the winery greeted her with, “Isn’t (insert name of talentless local writer here) doing the write-up this year?” Then the tasting began.

Toward the end of the interview, the winery owner began waxing eloquent on the wine tasting / chocolate party extravaganza he was planning in conjunction with the owner of our area’s world-class chocolatier. This special event was in the works in order to impress a writer for the Chicago Tribune. Local press need not apply.

This, more than anything else, left a very bad taste in my friend’s mouth.

“What am I, chopped liver?” she wondered. Clearly, in the mind of the vintner, she was.

As my friend related her experience, I thought of food critic Ruth Reichl. When she was with The New York Times, her reviews held so much import that her photo was posted in restaurant kitchens. Chefs offered rewards for information on when she might appear at their establishment.

Since her treatment was so preferential (not to mention reverential), Ms. Reichl took to wearing disguises in order to more accurately sample what a restaurant really had to offer. Often, the difference between the food the critic was served, and the food the “real person” received was so significant, that Reichl would write up two different reviews for the same place! (For some sumptuous reading, check out Reichl’s book Garlic and Sapphires: The Secret Life of a Critic in Disguise.)

Back to my friend. First, let me say that she knows her wine. She grew up in California, has traveled extensively and has an educated palate. She’s also a darn good writer, with credits in national periodicals and a Masters degree in English to boot. Her current assignment may be for a dinky little paper, but that doesn’t mean no one will read it. The vintner would have done well to remember this.

As writers, too often we feel like the “little guy.” We feel overlooked, undervalued and – almost always – underpaid.

The film industry routinely pays the screenwriter pennies to the star’s dollar, without taking into consideration that great stories, great characters and great lines are hard to come by.

The publishing industry is built on the agent's premise that "if I like it, but don't adore it, then I won't represent you." It's easy for unrepped writers to degenerate into the most pathetic, whiny, weaselly creatures, crossing our fingers and praying to Whoever is Out There that one person will adore what we've written. As if one person somehow has the magical ability to transform us from a minnow into an enormous grand poobah of a big fish.

I have ghostwritten bestselling books for clients who literally could not be bothered to say “Hi” when I showed up at one of their public appearances. At times when people begin to believe their own press, perhaps someone should remind them who the press is.

If you are stuck in “little guy” mode right now, afraid that no one will ever recognize you for the brilliant, talented scribe you are, take heart. Then take action.

Quit waiting for someone else to make your dreams reality. Search out other people who are as overlooked as you.

Make friends with associate editors, junior agents, interns and assistants. Form alliances, exchange favors, follow on Twitter, become Facebook fans, attend conferences together... Join forces and help each other gain recognition. You will be amazed at how quickly “little guys” can grow.

A word to the wise, however:

Make a pact now to never forget where you came from and -- when you've finally made it -- to remember those who helped you get where you are.
Posted by Ami Hendrickson at 4:54 PM No comments: