Earlier this month, my dear friends Barbara, Kathy, Kim, and Lisa put on a Reader's Theatre event to benefit our family as we deal with the fallout of WunderGuy's rapidly failing battle with this last brain tumor. I presented "The Crisis Cure" as part of the event. Here's the video:


The following is an updated version of that piece...

It’s mid-June. My husband, Robert, who had his fourth and final brain surgery at the end of January, has been home from the hospital less than two weeks.

Robert’s right side doesn’t work very well. He can’t walk more than a few steps, and that only with assistance. He thinks he can do more, so he randomly gets up off of the wheelchair or bed or toilet, only to crash to the floor. I’ve learned the medical description of  this is “his brain writes checks his body can’t cash.” He literally must be watched every moment of every day. He can feed himself, brush his teeth and use the urinal. His speech is limited. He sleeps 2 or 3 hours at a time. So I sleep 2 or 3 hours at a time. We are in crisis. We’ve been in crisis all year, it seems. 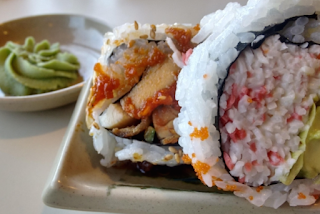 Obviously, given our situation, we are top-tier candidates to invite to a sushi party. Which is exactly what our friends Dana and Jeff Johnston do.

It doesn’t matter that they have to figure out a way to cobble together a ramp so Robert’s wheelchair can navigate the steps into their house. It takes five people, all crowded around my man, grabbing various pieces of his chair, heaving and pushing and pulling up two sets of stairs, but we find a way.

The Johnstons go all out. The table is packed with big bowls of sticky rice, green sheets of nori, tofu, eggs, julienned carrot and squash and cucumber, pickled burdock root, marinated mushrooms, avocado slivers, and more. Little bowls of dipping sauces, ranging from salty to spicy, complete the set up. We take turns using the square bamboo mat, each assembling his or her masterpiece of flavors, then rolling it, slicing it, and passing it around for everyone to sample.

We roll and eat and laugh and talk for two hours. The whole time, I am thankful for my blessings: thanks to my friends, crisis is averted for awhile.

It is the end of July. Robert is on his second round of experimental chemotherapy. The docs aren’t suggesting that it will reduce the existing brain tumor. We just hope it will slow the growth.

Robert can feed himself, but it takes effort. He can brush his teeth. He gets confused and mistakes the urinal for a waterbottle. So he wears briefs at night. I have learned to say “briefs” instead of “diapers.” I get up once or twice a night to change him. We are still in crisis.

Clearly, what we need is an arty party.

Which is exactly what my friend Kelly Smith (who had the audacity to move away because she found gainful employment elsewhere) brings when she visits. In addition to delicious homemade pesto and bread, she totes a stack of coloring books and a rainbow of colored markers and pencils. We sit at my dining room table and hang out and catch up; exactly as we would do if there weren’t a hospital bed taking up most of my living room floor and if my husband weren’t incapacitated. It’s not a way I’ve spent many Sunday afternoons in my life, but it’s the most normal thing I’ve done in months.

“This is wonderful,” I say, my mouth crammed full of chocolate banana bread. “Exactly what I needed.”

“I wasn’t sure,” Kelly confesses. “So I Googled ‘What To Do For a Friend in Crisis.’ It said, ‘Don’t ask what to do. Just do something. Something specific. Something you’d like if the situation were reversed.’” 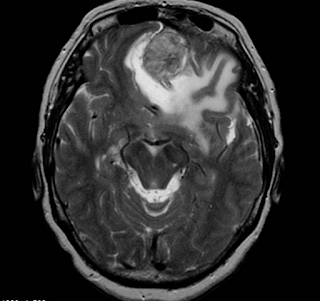 It’s August. Not only did the experimental chemotherapy not work, there is some indication that it contributed to two possible brain bleeds. No more chemo. No more experiments. No more... anything. The docs are out of options. They talk about hospice, but we’re not ready to go down that road yet.

Most of the time, Robert can still feed himself, but it takes forever. I brush his teeth. I bathe him. I dress him. He wears briefs all the time now. He no longer launches himself out of his chair or his bed, thinking he can walk. He no longer walks at all. The crisis continues.

Nick volunteers to watch Robert while I take our daughter to school so I don’t have to figure out a way to get him up and dressed and out the door first thing in the morning.

Thanks to Wendy, a surprise delivery brings eight big boxes of necessities to our door: briefs, exam gloves, mattress protectors. And I am overwhelmed with gratitude. Because, believe me, nothing says “I love you and I’ve got your back” like absorbent disposable underwear and diaper wipes.

Stacey, my roommate from college visits from Ohio and chucks her diet so we can spend a weekend self-medicating with chocolate.

Karen, whom we haven’t seen in years, flies in from California to spend time watching silly shows and reconnecting.

Alyson sends me two 10-pound shipments of high-end “bougie” coffee. A devout Mormon, she wouldn’t know good coffee if it scalded her. “I didn’t know what to get, but knew you drank decaf,” she said. “So I got some of every kind of decaf they had.”

Other friends help in ways too numerous to count.

Some sit with Robert so I can get out of the house.

Some are willing to make time in their busy schedules to meet for coffee or breakfast whenever I can get away for a moment.

Some send notes of encouragement. Some call to chat.

Some pray without ceasing for healing. For strength. For courage. For peace.

Some collude together and plan a benefit for our family and talk me out of my initial prideful skepticism and into the idea.

Maybe they Googled “Crisis Friends” as well. Because each one helps part the clouds that hover overhead to let the sun shine through.

It’s the beginning of November. Robert cannot shift his own weight. He cannot feed himself. He cannot hold himself upright. He cannot hold a conversation. He responds best to “yes / no” questions – and even then, you have to double- and triple-check his answers to be sure of what he means to say. Often, the words he says make no contextual sense. He literally must be told what muscles to use to swallow his meds or to open his hand. Some nights he is so restless he gets no sleep. Sometimes he gets so frustrated he bellows with rage. Barring a major medical miracle, he will not improve, but will, instead, continue a slow but steady decline.

I have learned when someone calls and asks “what’s happening?” not to answer “my husband just literally pooped in my hand as I was changing him.” Despite what they may say, people don’t really want to know exactly what’s going on. Instead, I say, “Same old, same old. What’s up with you?”

Because I know we are not alone.

You see: we aren’t the only ones in crisis. Since mid-June, a dear friend has discovered he has advanced Lyme disease seriously affecting him both mentally and physically. Another friend is this close to needing a liver transplant. One person has been looking for work while simultaneously battling debilitating back pain. A client has a teenaged daughter who is terminally riddled with cancer. Everybody is going through something. No one escapes this Earth unscathed.

People are reading this who are not currently experiencing the Perfect Life. They are dealing with problematic medical tests, worrisome relationships, housing concerns, career issues, mental health challenges, loneliness, pain, and loss. Maybe one or more of those things is affecting you right now. If it isn’t, I bet someone you know is.

We’re all stewing in one big Crisis Crockpot. So what do we do?

Amazingly, Google is right. Just do something. Reach out. Connect. Be there. Do the thing you wish someone would do for you.

Don’t say “let me know if there is anything I can do.” Because when my hands are killing me from lifting a 200 pound man who has forgotten how to use his legs and I haven’t had a shower in two days and I really – really – didn’t know a single human being could possibly produce that much urine, frankly, there is nothing I can tell anyone to do to make things better.

I certainly would never say: “send me gourmet coffee,” or “text me a goofy picture of your cat,” or “bring over a bunch of tie-dyeing materials and let’s have a party.” Yet, when my friends do those things, they are exactly the things I need to keep crisis at bay for awhile.

Crisis is a part of life. It’s the price we pay for existing. But if we’re lucky, we don’t go through it alone.

It’s today. My husband has not been out of bed in two weeks. He can no longer reliably swallow. To get him to take his meds, I have to depress his tongue and pull it forward, hoping he will swallow, but not choke or aspirate. It's all I can do to get any food into him. Boost and applesauce and pureed vegetable soups are keeping him alive... but we all know it's not for long. We prayed that he wouldn't pass away on Thanksgiving, and he didn't. But things aren't looking good for him to still be here by Christmas.

Still, thanks to our friends, we are not in crisis at the moment. Rather, we are overwhelmed with their kindness. Their caring. Take it from me: that is the crisis cure.