Going to the Dogs: Meet My Muses

Today, my blog is going to the dogs.

In a wild departure from the norm, I'm not going to talk about writing at all. I'm going to yammer on about the dogs that make my life worthwhile.

I'm only half joking when I say my dogs are my muses. Their quiet energy (they sleep most of the time while I'm writing) and their tangible warmth (at any given time, at least one of them is laying on my feet) stokes the creative coals. I create better, plot better, and write better when they are around.

And if, perchance, the Muse should prescribe a nap -- you know, for story purposes -- well, they're more than happy to crawl up on the couch with me for a little snooze.

When WunderGuy and I were first married, we lived in a house that had the approximate square footage of a midsize Buick. No dogs allowed. I found a way to get a horse, which I kept at the neighboring farm across the street. I found a way to get a cat. (It followed me home and I kept it. Ssshhh!) But a dog was verboten. I believe my desire for a dog was one of the fundamental reasons we bought our own place. That and wanting a living room larger than a postage stamp.

We had Dalmatians for years. Our first was a 4-year old that needed re-homed NOW! Within a few months of getting him, we also had a Dal puppy whose first owners had quickly realized they were not equipped to raise anything that wasn't stuffed.

In addition to our Dals, we acquired a beautifully bred, show-quality Whippet whose owner died and whose inheriting people gave him to us when we attended the estate sale. Oh, he was lovely! His favorite place to sleep was on his back in the bathtub, with all four legs waving in the air.

For years the back door to our house didn't have a lock. (We live in the country. Door locks are optional.) For years, it didn't need one. We had something better: we had Barney.

Barney was a full-grown Akita when we got him. He'd lost his family to divorce. His original owner was a fireman who worked 36-hour shifts. He didn't think it was right to leave the dog alone for days, so he came to our place. 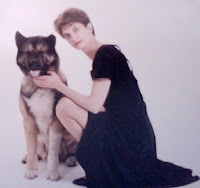 Barney was a gentle giant. He weighed well over 120 pounds in his prime.  I had never owned a Northern breed before. I was used to dogs that would actually pay attention to me when I called their names. Not Barney. He was very much his own dog. For the first 3 weeks we had him, I thought he was deaf.

Somehow, we ended up on a Dalmatian rescue list and for years we'd get calls about every spotted dog within 50 miles that needed a home. Our final Dal was Digory, a special needs case. We had 3 dogs at the time, but got a phone call from our vet the day before Thanksgiving that went something like this:

Vet: I've got a stray Dalmatian pup here about 6 months old. Found in a ditch. The person who found him thought he was dead. He's not. Yet. Animal Aid [a local rescue agency] will pay for his vet care, but he needs a home with someone who knows these dogs. Will you take him if he lives?

Vet: He's a rack of bones. At least 70% underweight, with a bad case of heartworm and road rash. I don't think he's going to live. But if he does--?

And that's how we got Digory. He spent weeks in the vet's office before he could come home. He was a good boy, but had deep seated aggression issues toward other animals. He was fine with the dogs and cats we had when he came, but we were never able to successfully introduce other animals afterward.

Digory lived 12 years. By then, we had a child. I thought "Dalmatians have so much energy. I'm not sure I'm up to handling both a kid and another Dal..."

So, in our infinite wisdom, we acquired a stray part-Pit who showed up at a friend's house. Pits, we discovered, have all the energy of Dalmatians, just without the spots.

River the WunderPit is a lovely 50 lb., brown brindle bundle of energy who never met a plushy squeaky toy she didn't disembowel. She's obsessive to the point of self-destruction. She can play soccer with a horse toy - literally - for hours, and sometimes must have the ball taken away in order to rediscover her brain.

I contend that River was the inspiration for Toothless the Dragon in "How To Train Your Dragon." To press my case, I present Exhibit A:

While River is "technically" my husband's dog, Kestrel is all mine. We had a lovely, sweet English Mastiff who died of lymphoma when she was only 1 year old. I was distraught. I went to the Humane Society, where Kestrel immediately claimed me as if she'd been waiting for me to get there.

Kestrel is like me: very Type A. After the Dalmatian years, I generally prefer my dogs to be bigger and more laid back. Kestrel, and Fate, didn't give a rat's patootie what I preferred. Kestrel is mine. Within a few days of getting her, I did the 3-Day Novel Writing Contest. While recovering from the Swine Flu. (No, I'm not kidding.) She endured it all with me.

There you have it: the dogs that keep me sane, workout with me, are ready for a play break at a moment's notice, and inspire me. They don't care if my writing is great or shoddy. They don't care if people know who I am or like what I write. They are unconditionally accepting; fuzzy purveyors of several of life's critically important Real Deals.

-- Do you have an animal muse that makes your writing time even more enjoyable? If so, contribute your own Ode to them below!
Posted by Ami Hendrickson at 1:35 PM 1 comment: