Thoughts on the Life and Times of Rev. Robert Stephen Hawker 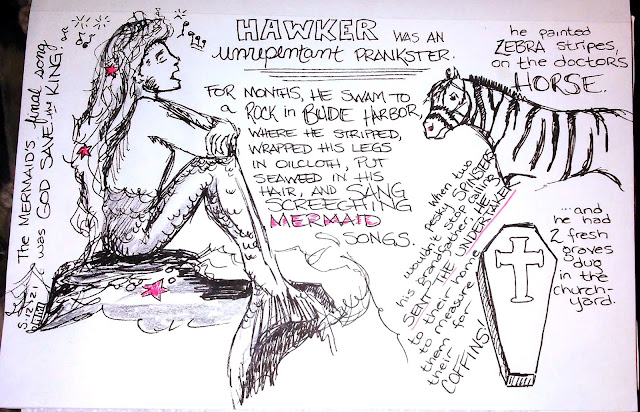 The mermaid perched on a rock in Bude Bay, wailing songs with unintelligible words. In the mid-1820’s, people did then what people do now: they stopped and stared at the screeching spectacle. A small crowd gathered, pointing and gossiping until the creature splashed into the water.

With each successive night, the crowds grew as news of the wondrous being spread. People came from nearby towns to see the sight. Many of them brought their telescopes, through which they could see the mermaid emitting brilliant flashes of light and combing its long hair of seaweed as it sang.

For weeks, the mermaid was a regular attraction – until one day a local farmer, angry at the crowds and the nightly circus, brought out his shotgun and fired at the singer.

With a lusty rendition of “God Save the King,” the mermaid splashed into the water for the last time.

The musical mermaid was Robert Stephen Hawker, a university student with a penchant for practical jokes. Hawker would strip naked and swim to a rock away from shore. A waterproof cloth wrapped around his legs provided his “tail.” A seaweed wig completed the ensemble. If the moon were near full, a small handheld mirror held at the correct angle provided flashes of moonlight.

Predictably, the local population was enthralled.

Robert Stephen Hawker was born at the end of 1804 to a poor British doctor, the first of 12 children.

From a very young age, he developed a reputation as a prankster.

He once painted zebra stripes and cut the mane off the local doctor's horse -- then called for the doctor in a fake emergency, ensuring that many would see his handiwork.

Young Harker became convinced that two spinster sisters had their sights set on his grandfather, with whom he was living.

He played a series of pranks on them that escalated to sending an undertaker to measure them for their coffins, ordering freshly dug graves in St. Andrew’s cemetery, and sending a hearse to take them to their eternal rest. Though this was too much for the old women, who left town and never returned, Harker’s pranks also succeeded in getting himself kicked out of his grandfather’s house.

From an early age, Hawker enjoyed writing poems and stories. He published his first book of poetry in 1821, when he was 17.

Hawker's father was a doctor who became a curate. With so many children, the family could not afford to send Robert to Oxford university. So in 1824, when Robert learned he would have to leave school, the boy ran from Stratton to Bude (a distance of several miles), to the home of Miss Charlotte I’Ans, his godmother, who had an annuity of 200 pounds.

He proposed to Charlotte, who at 41, was a year older than his mother. They married in November, when Robert was 20. By all accounts, the marriage was a happy one. They remained together, devoted to each other, until Charlotte's death.

When Hawker became a vicar, he and Charlotte moved to the tiny hamlet of Morwenstow, in north Cornwall, where he served from 1834 to 1875 (more on the later years of his Vicar-ship in the next post).

Hawker was the first resident vicar in over a century. He called the members of his parish “a mixed multitude of smugglers, wreckers, and dissenters of various hue.” He especially used the “dissenters of various hue” to describe the Methodists in his parish. He strongly disapproved of the Methodist religion, sneering at their lack of a priest or confession, calling their beliefs “salvation made easy.”

(How I would have loved to have debated the concepts of "salvation made easy" vs. salvation made difficult with the man. I suspect we both may have found some enlightenment.)

His mention of "smugglers" and "wreckers" wasn't hyperbolic. Many ships foundered and sank in the rocky northern waters. Until Hawker's arrival, the townspeople rejoiced at such disasters, looting the ships and often dispatching of surviving sailors in order to keep the spoils for themselves.

Hawker ended the looting. He insisted on helping shipwrecked sailors and provided a Christian burial for scores of souls who drowned off the Cornish coast. 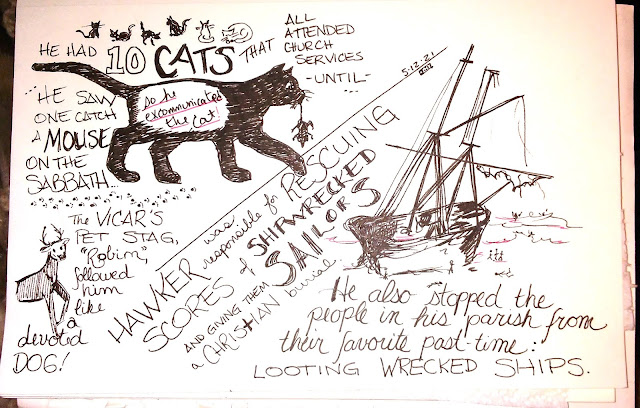 He had a pet pig and a pet stag who followed him everywhere. He especially loved cats. Though few humans came to hear his sermons (often, Charlotte was the sole person in the congregation), his 10 cats regularly attended services.

However, when the vicar saw one cat catch a mouse one Sunday, he immediately excommunicated it! History is unclear whether or not the cat ever saw the error of its ways and confessed its sins, or whether the vicar offered it absolution.

Posted by Ami Hendrickson at 8:45 PM