The Curious Case of the Poet's Missing Heart

or: Thomas Hardy, Eat Your Heart Out

(Note from Ami: It's been *forever* since I've blogged. I've spent much of the past year thinking about how to update / streamline / organize MuseInks. But it seemed like such an overwhelming chore that I just shelved it for a later date. [I mean, seriously, there are over 15 years of posts here.]

In the meantime, I've had some fun playing around with some cartoon ideas. You can see them on my Daze of Noah blog. In the past year, I've been playing around some with sketching, scribbling, and illustrated journals. Are they "good?" Nope. I have no illusions about my artistic ability. But I find the exercise incredibly fulfilling, so I thought I'd use this space to share some of them.) 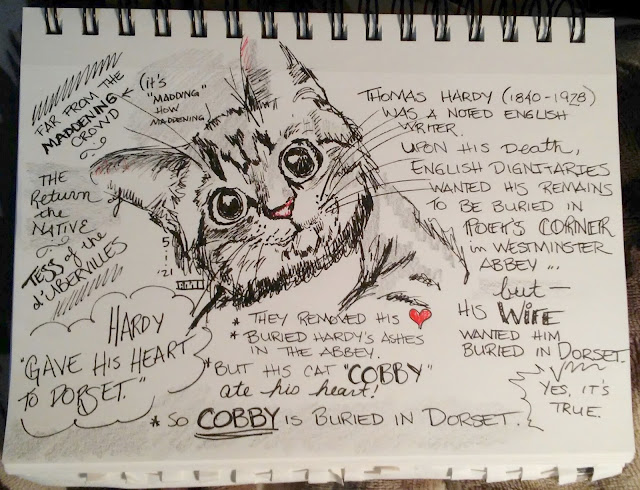 I only recently learned about the wild and woolly demise of Thomas Hardy, beloved Victorian English writer.

Hardy lived over 100 years ago and wrote books you've actually heard of, like "The Return of the Native," "Far From the Madding Crowd," "The Mayor of Casterbridge," and "Tess of the d'Urbervilles." You may have even read some of them.

He was also a poet, writing over 1,000 poems that were published during his lifetime, in addition to "The Dynasts," a massive, epic, nineteen-act play in verse featuring speculative fiction elements set against the Napoleonic Wars. The piece was so sweeping in its scope that it was never performed. Hardy himself called it "the longest English drama in existence."

So when Hardy passed away in January, 1928, it only made sense that England's elite would wish to honor him by burying his remains in Poet's Corner of Westminster Abbey. However his wife balked at the idea. He had so loved the area around Dorset that she wanted him to be buried at home.

A compromise was soon reached. Hardy's heart would be removed and buried in Dorset. The rest of him would be cremated and his ashes placed in Westminster Abbey.

A doctor removed Hardy's heart, placing it in a biscuit tin (cookie box) for safekeeping, and the rest of the body was taken to Westminster. The next day, however, before the heart was interred, Hardy's beloved cat, Cobby, discovered the tin and ate the heart.

When Cobby died, he was buried in Dorset, in a grave marked "Here Lies the Heart of Thomas Hardy." (Here history gets a tiny bit foggy -- because there is nothing to suggest that fluffy Cobby died of natural causes. I strongly suspect that Hardy's heart was kitteh's last meal.)

Posted by Ami Hendrickson at 6:38 PM