Why I Do What I Do

This will be the third straight week of clocking over 50 billable hours on one project. I'm near the end of the Rough Draft phase of a major project I'm doing for a Major Client. All day, every day, is spent at the dining room table / work desk.

(I work there, because it's the only seat in the house that has a good view of the pasture. Occasionally I can see Theo wander into my field of vision.)

I'll be glad when the Rough Draft work is done, and I can regroup before pushing forward with the First Major Edit. The good news is that this project is moving along quite nicely and -- dare I say it? -- appears to be slightly ahead of schedule. The bad news is that because of the very tight deadline, I really have time for nothing else.

Of course I'd like a day or two off. Who wouldn't? But I'm absolutely NOT complaining. I am thrilled to have this job. Not only is my client wonderful to work with, but I love having the privilege of being able to do what I do. 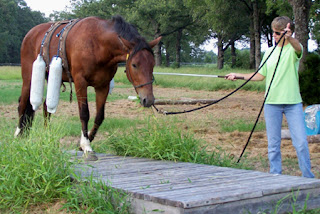 That's why I was gratified to read Wendy Hilton Smith's blog on her ongoing progress with Murphy, her Extreme Mustang Makeover challenge horse. (Wendy and her husband, Steve, are both competitors in this year's Mustang Makeover Challenge)


In today's post, Wendy talks about why she does what she does:

When you do this for a living, there is always the clock breathing down your neck. The customer wonders why you aren’t riding their horse yet, and why they aren’t neck reining yet, and why the horse isn’t absolutely perfect after 60 days of training. Then you remember why you got into training horses in the first place: because you love horses. It’s easy to forget that. I will be forever grateful to Murphy and God for reminding me of that.

That, in a nutshell, is why I do what I do -- Love. I love it! I love being able to take a jumbled mess of words and organize them into something that speaks to people. I love working with experts in their fields who truly have something of value to say. I love helping people look at their words and working to find the best way to make those words sing.

Wendy's right. When you do something you love for a living, the clock is always "breathing down your neck," because clients are on a schedule and a budget. But that's part of the fun and the challenge of doing anything well. And every once in awhile, a project comes along that reminds you of why you do what you do.

Just in case you were wondering, it is not illegal to have sex with somebody that's been dead for a week in Wisconsin. Bleah. Grave robbing is frowned upon, though.

And if you work for a dentist, it's ok if he implants fake boars' tusks and takes pictures of you while you're under anesthesia. You can sue him, but because he's a "kind-hearted, fun-loving man," and you're the idiot assistant, he can do anything he wants to you with impunity.

Scientists have discovered traces of a city that existed at Alexandria at least seven hundred years before Alexander the Great arrived and the city was founded in 332 B.C.

What was once a city is now part of the sea floor in Alexandria's harbor. But samples of dirt extracted from the sea floor contain remnants of an older settlement that may have flourished there as far back as 1000 B.C.

I find it interesting that Homer mentioned the exact location in the Odyssey, written sometime between 800 and 600 B.C.

Even more interesting is a comment made by Jean-Daniel Stanley, a coastal geoarchaeologist for the Smithsonian Institute's National Museum of Natural History.

Though the area might have once been a thriving ancient haven, "Virtually nothing is known of the people who would have lived there," says Stanley.

Life... Death... Hopes... Dreams... The million little things that drive us, challenge us, madden us, motivate us, and shape us -- gone. Once a city. Now virtually unknown. Lying dormant on the seafloor while modern refuse piles up on top.
Posted by Ami Hendrickson at 10:24 AM

I received a note from Dr. Warson today informing me that the first review of "The Rider's Pain-Free Back" was posted on Amazon.com -- and that it was a good one.

So, I wandered over and read it. The person who wrote it explained why she bought the book and what she liked about it:

I bought this book pre-order and it arrived very quickly. The author knows his stuff. I am an x-ray tech by trade, so nearly everything I read was understandable to me. He wrote the book so everytone could understand it- medical terms were explained, and there was an extensive glossary of terms. I got the book because my husband suffers badly from back pain and is an avid rider. I occasionally suffer from back pain- usually from doing too much sitting trot. The author was very complete in his assessment of the rider and even the type of horse they should be riding. Fortunately my husband and his horse are a great match, me and my horse aren't so good, but with some work I think we will be OK. The author also went through a series of stretches and also treatment options from traditional to alternative. I found it a very interesting book with a lot of information for anyone who is interested in riding. I even loaned it to my chiropractor who said he would probably get a copy because he treats riders as well.

(In case you're wondering, no, I don't know the person who wrote the review!)

Lately, I've been thinking about reviews. I wanted to find out more about a particular movie, so I read some online reviews. Unfortunately, this resulted in me finding out less about the film and more about the people who both loved and hated it.

Reviews are a tricky thing. They can usually be divided into several camps:

From a writer's point of view, when reviews start coming, at first you think you want the Rabid Fans to write. But you quickly discover that Rabid Fans are nearly as bad as Angry Malcontents. Their agenda is so transparent, that it casts serious doubts on the validity of the review.

Though I'm happy that the review on Amazon.com casts a very favorable light on Dr. Warson's book, I'm even happier that its in the "Fair and Balanced" camp. They can be difficult to come by, and they're worth their weight in gold.

Work on The Major Project continues. I'm clocking over 50 billable hours on this project every week. My dining room table is my "for the project" office and workspace. From it, I can at least see Theo out there in his pasture, even if I don't have the time to ride him!

A development exec has asked to see "Unknown Soldiers," one of my screenplays, and is considering developing it into a graphic novel. That would be fine by me. I just want to see it in my lifetime. If I have to see it on the page before I see it on the screen, you wouldn't hear me complain. Further bulletins as events warrant.
Posted by Ami Hendrickson at 1:01 PM

Earn a Million Dollars by Not Watching TV!

According to a recent article by Jeffrey Strain on TheStreet.com, watching television will cost you over $1 million in your lifetime.

Interestingly, the same article referenced a study that concluded it would take about $1 million for Americans to give up television.

The original study was actually concerned with pervasive opinions about race in America. It concluded that those in the majority have a significant disconnect with those in the minority.

I would argue that anyone who requires $1 million to turn off the TV also has a serious disconnect problem.

We haven't had a TV since.

Our "TV" is an early 1980's console model that belonged to my Grandfather. It has 13 channels, and tubes. The screen has a ding in the center of the glass from an unfortunate run-in with a drill bit that fell out of my hands while I was putting up a curtain rod.

The TV is connected to the DVD player. It's a glorified movie screen -- and, with the aforementioned "ding," not a great one. In closeups, the ding generally manifests as a sizeable blemish on the leading actor's nose.

Ironically, we actually have cable. It's how we get our high speed internet access. But it's not hooked up to the TV. If I don't have time to watch the movies I want to, how would I ever find the time to watch TV?

In this day of high-speed lives, with people complaining about a chronic lack of time, kids growing up in daycare, a society that is increasingly inured to violence, and millions of dollars a year spent on health concerns brought about by a sedentary lifestyle, I find it amazing that TV even exists.

Imagine how much space would be opened up if no room in the house was arranged toward the Television Shrine!

When I tell people that we don't have a TV, they often don't believe me. More times than I can count, I've been asked, "Then what do you watch?" without the least trace of irony.

Frankly, it would take a lot more than a measly million for me to bring a TV back into my home!
Posted by Ami Hendrickson at 9:07 AM