When I was helping hunter / jumper judge and trainer Geoff Teall write his book, he brought up the concept of the Annual Extra. The annual extra was one thing he determined to add over a year -- in addition to his regularly scheduled program -- thus making it part of his routine.

I love this idea. This year, I am going to implement an Annual Extra in several areas of my life.

* Professionally, I'm going to start sending out a newsletter.

I'll continue blogging, aiming for regular updates every Monday, because I like the longevity and permanence of a blog. I've met so many wonderful people through the magic of internet searches that bring them to my posts. (Of course, if net neutrality becomes a thing of the past, blogging probably will too. Guess we'll cross that rickety bridge when we come to it.)

Blog posts are forever. But I want the opportunity to interact in a little more timely and personal way with people. Hence: the monthly MuseLetter. [You've signed up for it, right? If you're reading this on your phone, you may have to click "View Web Version" at the bottom, but there's a nifty MuseLetter signup form. It would be cool if you'd join me on this little adventure. I solemnly swear not to waste your time.]

I want a place to share cool things I've discovered while researching my latest projects, odd or quirky books and movies that lie far off the beaten path, portraits of fascinating people I wish I'd learned about before, and more. I figure if such things inspire me, they'll likely inspire others.

* Creatively, in addition to the two books I intend to write, I'm going to finish "ANTHEM," a concept musical honoring American women.

This is a big stretch for me. My songwriting has always been something I've pushed to the back burner. Writing the songs is one thing. That's fun. Letting other people hear them -- that's way out of my comfort zone. But it's something I'm going to tackle this year. Because: growth. 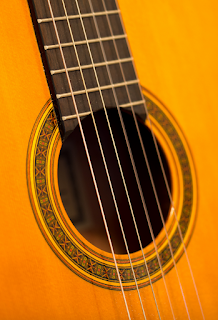 Telling myself I'm going to learn to play it. Again.

Last year, I did fair-to-middling with this decision. Until about March. Then, erm, well, let's just say my good intentions became paving blocks on the highway to Hell.

But I mean it this time! I've trimmed my fingernails ("too long; can't practice" is relegated to the trash-heap of 2017). I've loaded GuitarTuna on my phone to practice chords when I'm sans instrument. I've re-searched and re-found and re-bookmarked the YouTube tutorials I need. I'm gonna do this!

Why am I telling you this? Two reasons: 1.) Telling the world of my plans makes me more accountable. And 2.) perhaps you, too, would like to join me in my Annual Extra extravaganza.

What extra thing do you want to make a regular part of your life in the next twelve months? What additional skill would you like to have? Do you want to write a novel? Make a film? Learn a new language? Maybe you'd like to keep a neater house, have a container garden, or learn ballroom dancing. Your Annual Extra could be "write an actual letter to someone every week and send it" or "take up watercolor" or "become proficient in C++." Whatever it is, here's your official green light. Make it happen. Blessings to you as you put another wrinkle in your brain in 2018!

Posted by Ami Hendrickson at 3:03 PM