Cynisca: Badass Horsewoman and the First Female to Compete in the Olympic Games

My admiration for Cynisca knows no bounds.

This Greek princess was born in the early 440's B.C.E to Archidamus II, the King of Sparta. She owned several race horses, enjoyed chariot racing, and -- thanks to her brother Agesilaus II, who encouraged her love of horses at an early age -- was an avid horsewoman. 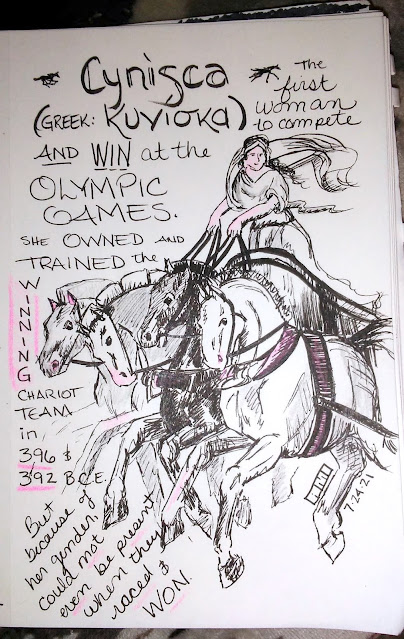 Birth records are dicey here. Some historians put Cynisca's birth as early as 444, others as late as 440.

Though women were forbidden from watching the Games, let alone compete in them, there was a loophole with regards to the equestrian events.

Since owners and trainers rarely  handled the horses during the actual competition, there was no rule against women being involved behind-the-scenes, as long as someone else did the actual horse-handling during the races.

She owned a string of race horses and trained them for the *extremely dangerous* 4-horse tethripon chariot races.

Though historians may not agree on her precise birthdate, all recognize that in 396 B.C.E., in her 40's, Cynisca became the first woman to compete in the Olympic games, as both owner and trainer.

To prove it wasn't a fluke, four years later, at the next Olympic games, she entered another team and won again.

She may have been forbidden to be present while her horses were racing, and was unable to see their victory, but that didn't stop her from mopping the hippodrome's floor with the competition.

Xenophon, the quintessential Greek horseman, wrote glowingly of her accomplishments (however, he was careful to keep her under the shadow of her elder brother).

In Olympia itself stood a statue of the great horsewoman in a chariot pulled by her winning horses.

Modern archaeologists have discovered the base of this statue, which includes an inscription with Cynisca's name and accomplishments.

So impressed were the Spartans with their princess that upon her passing, they built a heroön, or hero shrine, in her honor. Hero shrines were often used to instill long-lasting civic pride in a noteworthy member of the community. Cynisca was the first woman to have such a shrine built (other shrines were reserved for deceased kings).

For years after her death, a hero cult of super fans kept her legend alive. Which is only right.

As I said before: BOUNDLESS admiration.

Posted by Ami Hendrickson at 10:02 PM