You wouldn't think such a humble, slimy, smelly thing would appeal to Victorian sensibilities. But you would be wrong. 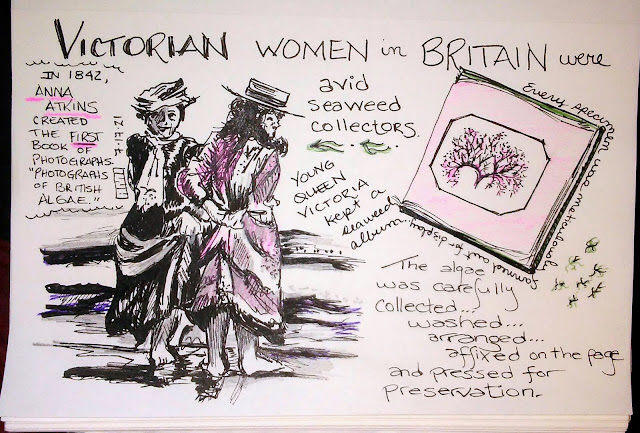 According to conventional wisdom at the time, Queen Victoria kept a scrapbook of various seaweeds and algae when she was small. Since nothing says "influencer" quite like being royalty, soon the entire nation had adopted her hobby.

In addition to giving them something in common with their beloved queen, padding about the seashore afforded one of the few socially acceptable ways to be in public with ::gasp:: bare feet and bare ankles.

It also enabled them to indulge their astounding creativity in a way that did not involve sewing or needlework. Seaweed scrapbooking was not a mere matter of snagging a bit of algae and splatting it down on paper. Hardly! In order to be preserved, every specimen was carefully collected, washed, arranged, affixed on the page, and pressed for posterity.

The scrapbookers used special tools including needles, forceps, scissors, and tweezers to meticulously arrange every specimen on the page, fanning it out to display it in all its glory.

In 1881, Alpheus Baker Hervey wrote "Sea Mosses: A Collector's Guide and an Introduction to the Study of Marine Algae."

This booklet contained 281 pages of text and stunningly gorgeous color plates detailing everything the avid collector needed to know to preserve their own specimens on paper, presenting both their delicate structures and their vibrant colors. 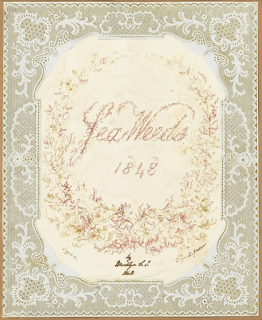 Some scrapbooks went far beyond mere seaweed samples. Creative artists used the seaweed as a medium in which to write words, do intricate decorative designs, and even construct images.

In 1848, Eliza A. Jordson fashioned a scrapbook that remains a work of art. The cover includes the words "Sea Weeds" in flowing cursive, spelled out with actual algae.

In some parts of Jordson's book, seaweed explodes on the page like a beautiful Rorschach test. In at least two pages, she uses it to "paint" tiny still-lifes of houses and trees.

A few years before Jordson's scrapbook, Anna Atkins, a botanist and avid student of the brand new, developing (ha! -- sorry, not sorry) field of photography, created the first book of photographic images ever.

Photographs of British Algae: Cyanotype Impressions was painstakingly handwritten and illustrated with beautiful blue-tinted cyanotype photographs. Published in 1843, the book is extremely rare, with fewer than 13 complete copies in existence.

For some reason (perhaps the Queen's interest?), though nineteenth-century women were excluded from most scientific studies, seaweed collecting was allowed, if not actively encouraged.

Children's author, translator, and naturalist Margaret Gatty became enamored with algae collecting. In 1848, while convalescing at the seaside in Sussex, Gatty was introduced to seaweed collecting, which she described as her "consolation of consolations."

Three years later, she was so enamored with the past time, she coined the word "algologist" to describe herself in the census.

Though Gatty could not afford a microscope to fully explore the algae that fascinated her, she began corresponding with several noted scientists, including William Henry Harvey, the pre-eminent phycologist of the time. She borrowed books and equipment from Harvey and eventually worked alongside him.

During the 1850's, Gatty wrote a manuscript discussing ways to simplify the classification of algae. However, the project was never published. Instead, she was commissioned to write and revise the prestigious Atlas of British Seaweeds Drawn from Professor Harvey’s Phycologia Britannica.

Gatty suffered from debilitating pain throughout most of her adult life. Most biographers suspect she lived with undiagnosed multiple sclerosis. Though her health deteriorated until she eventually lost the use of her arms and her legs, she continued her studies.

Gatty died in 1873. Today, her collection of nearly 9,000 specimens and over 500 plates has a home in the St. Andrews Botanic Garden.

Posted by Ami Hendrickson at 11:34 PM