Discovering the Depths of Subtext

Lately I've been thinking a lot about subtext and one's ability to communicate with one's target audience.

Subtext -- conveying meaning and understanding without clearly stating the information -- is one of the publishing industry's favorite bits of jargon. Good writers excel in using subtext to engage the reader. When applied correctly, subtext adds depth, layers, and texture.

Many how-to articles try to tell writers how to incorporate subtext in their work. But thanks to a recent Twitter exchange, I've come to the conclusion that most of them miss what should be an obvious starting point. You see: in order to master subtext, the writer must first make sure that the stuff on the surface is interesting and engaging in its own right.

Why? Because the deeper stuff will be lost on some readers.

Not all readers are created equal. Not every person who reads a work will possess the necessary tools to enable him or her to appreciate the extra nuances subtext provides. If a reader must understand the subtext in order to appreciate the content, the writer has done little more than craft a Members Only piece. Though it may stop shy of navel gazing, it is the literary equivalent of delivering a heartfelt sermon only to choir members.

Layer I: The Surface

Some people looking at this picture bring with them a limited understanding of horses and training. Those not "in the know" don't see anything except the obvious. But that doesn't mean they can't find things to appreciate.

The endearingly citified Yi Shun Lai (@gooddirt) confessed: "All I see is the literal ponytail."

And this is fine.

The picture contains an element -- a pony tail in a ponytail -- that is both interesting and unexpected enough to engage even someone who is not a horseperson. Likewise, some people will never delve deeper in the written word. It is the wise writer who deliberately crafts scenes to maintain surface tension.

Even non-horse people can dive a bit deeper when looking at the photo in question. Some might find their eye following the sight line of the legs' shadows. Though both horse and human are so well aligned that their shadows merge seamlessly, the shadow originates with the girl.

Now, it is entirely possible that this element of composition, the merging shadows that enable the viewer to think in terms of metaphor, was a happy accident; a coincidental construct. Nevertheless, the mere act of taking the picture involved forethought and intent.

So, though some might read more into a text than the writer consciously intended, never underestimate the power of the subconscious muse, sprinkling poetic subtext like fairy dust to brighten the astute reader's day. 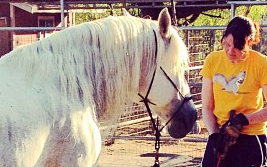 I would wager that most "horse people," upon seeing the original photo, zero in on the horse / human connection. For those who speak horse, this is a lovely representation of communication, contentment, trust, and companionship.

The horse is dry, not sweaty. She hasn't been run into submission. Her ears are relaxed; she is at peace, yet she is willingly placing herself in close proximity to the handler.

No pressure on the halter or on the lead rope forces the horse to stay in place. She is where she is out of choice, not coercion.

The trainer's body language is one of calm, reserved acceptance. She, too, is relaxed. Her shoulders, arms and hands are quiet and contained. She is not forcing her presence on the horse or imposing her will on the mare.

The mare is not your typical riding horse. She's a heavy breed, probably weighing close to a ton. She's also clean, well-fed, well-groomed, and healthy. She's symmetrical and sound, which means that she enjoys excellent care, in addition to enjoying her handler's attention.

All of the above information is immediately available at a glance to people familiar with horses. It doesn't matter if they ride English or Western. It doesn't matter what language they speak, what breed they prefer, what country they live in, or how accomplished a rider or trainer they are. Such information contained in this single photo is the equivalent of genre-specific subtext -- readily grasped by fans, but lost, perhaps, on those unfamiliar with a particular literary category.

Then there is the information that unpacks the photo still more, if one knows where to look for it.

For instance, only those familiar with the Natural Horsemanship training philosophy will recognize the equipment and be able to identify the handler's training influences.

The black rope halter could come from several sources: Clinton Anderson, Double Dan, Josh or John Lyons, Buck Brannaman, to name only a few. But the Dans, Lyons, and Brannaman don't generally use hardware on their leadropes, so that narrows things down...

It's the stick that speaks volumes. Lots of trainers use sticks: Clinton, Steve and Wendy Smith, Pat Parelli, and more. But the color is a giveaway. The "carrot stick" is orange: practically shouting "Parelli!"

Which means there's a good chance that the trainer is a PNH fan. If so, she probably knows the Seven Games, understands her mare's "Horsenality," and is working on improving her grasp of the Four Savvys.

Which also means that though there is more to unpack in the photo for those who are Natural Horsemanship aficionados, some of the subtext therein is lost -- even on horse people. It is possible for subtext to apply only to the Chosen Ones. Those not in the know find it as difficult to decipher as the preceding paragraph.

In writing, it's common to salt in such privileged information for hardcore fans. That kind of subtext is the equivalent of gaming Easter eggs -- of interest and of use only to a select few.


Layer V & Beyond: The Murky Depths

And then there's the Super Deep Seafloor Subtext. This stuff may resonate only with one or two people on the planet. In fact, it may hold meaning only to the writer.

For instance, I don't know enough about the mare and the trainer in the picture to know their history.

But what if the mare was a rescue? Or if she had a serious attitude problem that had perplexed other trainers? What if she had colicked recently or had recovered from a serious leg injury? That knowledge would make the picture one of supreme achievement: overcoming the odds to reclaim what others considered lost.

Or... Imagine if financial or medical concerns beyond the girl's control had necessitated selling the mare to a new home. This photo could be documenting the last time they ever worked together: a penultimate goodbye, adding tragic undertones to the image.

Or... What if a lifelong fear of horses had plagued the girl? That tidbit of information could tint the picture with several shades of empowerment and optimism.

If such backstory is available only to a few souls, then the subtext associated with it is lost to the larger audience. However, that doesn't negate its influence on those privy to the information.

The wonderful thing about subtext is that it provides a well of meaning for the words we write. If done correctly, it offers something for everyone. It entertains those content to just scratch the surface, yet rewards those willing to dive deeper.

Super special thanks to @SubjectPlusVerb and @ReadSchmead for the use of their picture for this post! -- A.H.
Posted by Ami Hendrickson at 7:30 PM

Hi, Sarah,
Thanks for commenting.
Horses are life. :)
My kingdom for a... You know.