On the 5th Day of Christmas, My True Love Gave to Me: 5 More Minutes

"On the fifth day of Christmas,
My true love gave to me:
5 More Minutes!
4 calm equines,
3 fuzzy dogs,
2 flightless birds,
and an old farm in the country."

No list itemizing the things for which I am grateful this Christmas season would be complete without singing the praises of my husband of 23 years. 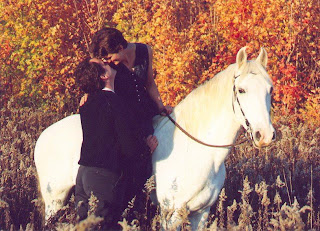 Robert, whom I generally refer to here and on Twitter as "WunderGuy," is (in a word) amazing.

We've spent more of our life together than apart. In all our time together, he's never picked a fight, criticized my opinions, or refused to listen to me. He's not a "Yes Man" by any stretch of the imagination. He has his own thoughts and theories. But he's also capable of listening to opposing viewpoints without getting defensive or resorting to underhanded arguments.

I see so many (too many) married couples who no longer respect each other. For some, it seems that they go out of their way to belittle their partner and cut him or her down. I am so grateful for my husband's continued support and friendship.

Robert and I met during Freshman orientation at our university via a prank phone call I made. (True story.) Our first conversation lasted for 2 hours -- into the wee hours of the morning. Shortly afterward, I dumped my then-boyfriend to go out with Robert, who was just so darn sweet and cute.   (Yes, I know; teenage girls are so fickle. Guilty.) I had every intention of dumping the new guy when someone better appeared. I had no way of knowing then that no one "better" would ever even be a blip on the radar.

We have precious little in common. I'm a country girl at heart. He's more of a townie. I'm at my best when surrounded by fuzzy animal bodies. He doesn't require a dog, cat or horse to make him happy. I'm a night owl. He's SUCH a morning person. I love being outside. He was perfectly content to be a fluorescent-light-lit cube dweller for years.

But we share the same ear for music, eye for movies, and heart for humor. Over the years, an entire sub-language has evolved between us comprised entirely of book and movie quotes that have become our own personal in-jokes. Only when others comment that they can't understand us do we realize how often we lapse into the We-Speak.

Perhaps nothing more aptly illustrates my gratefulness for Robert the WunderGuy than our current early-morning routine.

When school started this year, I'd set the alarm so I had time to get up, get C up, let the dogs out, do outside chores, shower, make lunches, and get out the door on time. Within a few weeks of the routine, Robert started getting up when the alarm went off. He takes care of the dogs and makes C's lunch so I can hit the snooze button one time and get five more blessed minutes of sleep. This may sound like a little thing to some people. But to this non-morning person, it is huge! Every morning, it makes me appreciate him a little more...

What are you grateful for that others might find trivial, but to you is immense?
Posted by Ami Hendrickson at 12:34 PM

Ami, I am LOVING this series!! so beautiful!!

My darling Sweetie leaves me a pot of hot coffee bed side every day to lure this non morning gal from slumber. So amazing and thoughtful! We have less time time then you and your Robert but I'm playing for a similar story!!

Yes, you are right, Ami. It is the little things that are so important. I feel fortunate that I married a lovely man, too, 26 years ago!

Kathy,
How kind of your Sweetie to woo you with coffee. Truly, yours is a match made in Heaven. :) Wishing you many years of bliss -- may you be as happy as we are.

Gale,
I've said many times (and continue to believe it): there are few things better than a good marriage... and few things worse than a bad one. I agree with you: I count myself blessed every day I get to spend with my guy. And I truly sympathize with those who are not as fortunate. May you and your man have many more happy years together!