On the Third Day of Christmas, My True Love Gave to Me: 3 Fuzzy Dogs

"On the third day of Christmas,
My true love gave to me:
3 fuzzy dogs,
2 flightless birds,
and an old farm in the country."

My dogs are members of my family. There's Type A Kestrel, who if she were a horse would be a warmblood -- leggy, athletic, with legendary endurance. After we lost our English Mastiff to systemic lymphoma, Kestrel crawled into my lap at the Humane Society, stared into my eyes and refused to budge.

"My person left me here," she said more clearly than audible words. "I have no idea why, but I'm expecting you to remedy the situation."

She came home with us before the ink on the paperwork was dry. Shortly after adopting her, I came down with Swine Flu (which sounds a lot funnier than it really is), then participated in the I-Can't-Believe-I'm-Actually-Crazy-Enough-To-Do-This 3-Day Novel Contest. The new dog and I literally spent an entire week of concentrated time together. This resulted in significant separation anxiety on her part when I was attempting to sleep for the first time in days.

Kestrel's not really into sleeping. She is the kind of dog who sleeps with one eye open. It's difficult to get a picture of her really gone. Only once have I been successful: 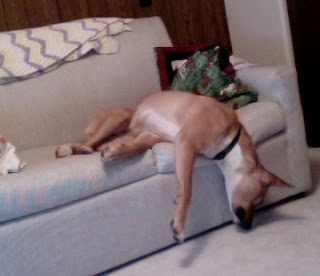 Usually, however, I end up with something like this: 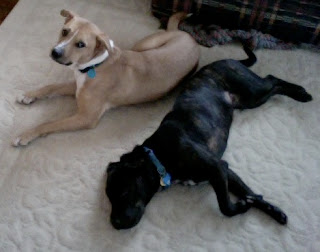 River, the unfortunate example of what happens with an pit bull gets intimate with a Shar-Pei, has no such compunction. She's like a racing Quarter Horse: all the energy in the universe crammed into a compact brown-brindle body. She expends it in a primal burst -- POW!!  Then she's done. She's either "ON," obsessively playing with her Jolly Ball (see video below), or "OFF" (see photo above).

And last, but in no way least, there's Barkley. The only male. The only purebred. The only dog who outweighs me. The only laid-back, Type B Zen-master. Barkley has mastered the art of living in the moment. His role in life is to hold the floor down and act as a back door draft deterrent. He does these jobs well. 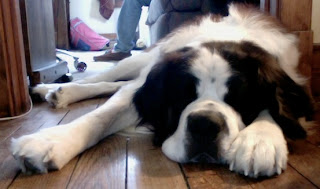 Barkley loves all creatures great and small. He's not nearly as fond of laying in front of the fireplace as Kestrel and River. Instead, he prefers to park himself in front of the Magic Box that displays moving pictures accompanied by realistic sounds. He's quite myopic and we speculate on how real he thinks the things inside the TV actually are. In any case, he knows the moment we pop a DVD in and hurries to his spot so he can watch along with us.

These three dearhearts make every day warmer and more wonderful. They are all "rescues." River was an unspayed stray who wandered into a good friend's front yard. Kestrel and Barkley were adopted after being dumped at the Humane Society. Someone else's loss is my inestimable gain.

I often say that my dogs help keep me sane. People laugh as if I've made a joke, but I fear I'm far more serious than they suspect. Every day, my dogs provide me with the priceless gifts of genuine enthusiasm, adoration, and unvarnished love. I am forever in their debt.
Posted by Ami Hendrickson at 6:10 AM

LOVE your dogs. Almost as much as I love mine. My two chihuaha's were rescued from my mother's neighbors who were going to drown them (yes, yes they were) and my Bella, was the neighborhood stray who everyone fed until I got fed up with no one actually inviting her in.

Can't imagine my life without them.

Barkley watches TV because you do. he is part of the pack. we can learn a bunch from a zen dog; that the world gives us many opportunities to practice serenity: why get worked up when a nap will do the trick? why worry about profound misery when the decision to be happy is just as easy to make?

we can make the observation that the Universe sent you Barkley to show you the way to happiness, and i think that he is doing a very good job of that. i am grateful for him, and grateful for you that he is showing you da way.

may the Spirit of the Great Pop Tart permeate your Holiday Season.

Anne,
Thanks for commenting. Kudos to you for adopting your pack. A dog is capable of endless quantities of love. I have never understood those who willingly destroy that. Mine certainly make my life worth living. (As I write this, my 8 y.o. daughter is frolicking in the living room with Barkley, who outweighs her 3 to 1. Both are blissed out.)

Sammy,
PopTarts for all, and to all a good night! :) While it's true that Barkley watches TV when we do, he's also been known to go park himself in front of the turned off video monitor and wait patiently for someone to turn it on for him. Evidence suggests that he thinks we are his opposable thumbs. :D

I think you're right: both worrying and being happy are decisions. My dogs show me the wisdom of living in the moment and choosing contentment over fear.

Ha! The title of my blog actually IS "My Dogs Keep Me Sane". LOL I have three Border Collies (all rescues), and each one has a completely unique personality from the others. Your dogs are all beautiful! Great post! I smiled the whole time reading it.

Misty Dawn,
It's gratifying to know that I am not alone in my "Dogs as Therapists" theory. My dogs definitely keep me sane. I'd hate to be around myself without them. :) Border collies - wow! What energy! Kudos to you for rescuing such bundles of joy. Thanks for commenting!