For the past several years, my friend & neighbor Sheila has had a goal: To drive through the McDonald's drive-thru. With her horse.

Sheila works full-time. She's got kids. Grandkids. In the past year, her mother-in-law who requires hospice care and close attention has moved in to their small farmhouse. She's had horses for years, but she's not what one would call "accomplished." Oh, sure she can ride. She can drive. But she's never shown. She's not one of those horse people.

The fact that she has zero desire to ride or drive competitively has not stopped her from having a goal. When she got Will, her grade Belgian gelding, she announced "I want to take him through the McDonald's drive-through."

Which is 5 miles away, on the other side of town. 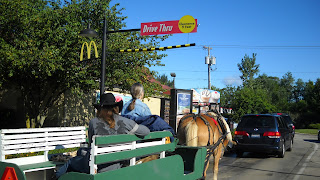 There were a thousand and one reasons why she shouldn't reach her goal. It's a long way away, as the horse walks. It's infinitely easier, faster, safer, and saner to jump in the car and turn the key anytime she's craving fries. But where's the fun in that?

Some people laughed with tell-tale condescension when they heard Sheila's goal. They didn't say "That's silly" to her face. They didn't have to. She could tell who supported her and who thought she was nuts.

We writers know a bit of having drive-thru goals. Often, just saying "I want to be a writer" qualifies. Writers quickly discover a thousand and one agents, publishers, and editors who don't share their vision. When we begin a novel, writing "the end" is a long way away, as the plotter plots. It's easier to read someone else's book than to write our own. Ah, but where's the fun in that? 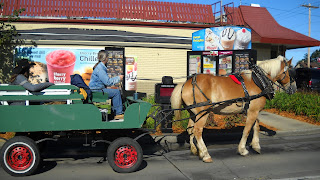 I facilitate a weekly Writing Practicum for writers pursuing publication. Traditionally, when a new writer joins our group, I ask for a backward introduction. "Introduce yourself to us as if it is three years from now."

"Now introduce yourself again. This time, as it if is one year from now."

We are treated to visions of brilliant writers poised on the brink of publishing success.

"Now, please tell us who you are today."

And we meet the aspiring writer with drive-thru goals. 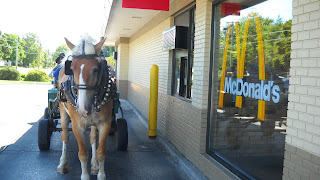 Nothing -- NOTHING -- is wrong with drive-thru goals. We all have them. So what if no one else shares them? So what if people think our quest is laughable or futile? Who needs the naysayers?

Don't listen to those who tell you life would be easier, faster, safer, and saner if you only had different priorities. Keep your eyes on the prize. Practice your craft. Know the route you want to take. And one day, if you stay true to yourself and to your writing, you'll make heads turn when you make those dreams come true.

I love this post. Great story. Very uplifting, it made me smile.

Trish,
Glad you liked it. My friends never cease to inspire me. :D Here's to *your* drive-thru goals -- whatever they may be.

Great linking the two concepts. I've reached my drive-in goal and now I'm on to the next.

This was fantastic! I really like how you brought these two ideas together in the end. I think all aspiring novelists can relate to this. I'm still in my barn, plotting my drive through goal. I'll get back to you after I've achieved it. ;)