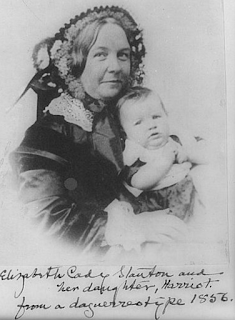 Recently I was reading about the remarkable Elizabeth Cady Stanton (whose journalist husband Henry co-founded the Republican party).

Born in New York on November 12, 1815, Ol' Liz was a supporter of racial and gender equality, speaking up for women on everything from access to contraception, to property ownership, to voting rights.

Liz was a good friend of Susan B. Anthony. Because of their passionate commitment to women's causes, both refrained from supporting the 14th and 15th Amendments, arguing that, while the Amendments offered protection to African-American men, they neglected to include women.

In 1848, Stanton wrote The Declaration of Sentiments, a gender-equal document presented at one of the first Women's Rights conventions and signed by 100 men and women.

Predictably, not everyone was a supporter of allowing all humans to enjoy the same rights. (The very idea!) Detractors called it "the most shocking and unnatural event ever recorded in the history of womanity." 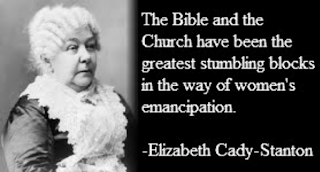 In the 1890s, Stanton wrote and published "The Woman's Bible," which challenged the belief that women should be subservient to men. The views in the book divided supporters of the women's rights movement, who were afraid it was too controversial and would harm their cause. 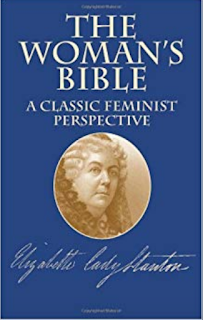 Liz was in favor of equal rights for with regards to both race and gender -- she supported interracial marriage at a time when very few shared this view. However, she suffered from her own prejudices: she supported the Spanish-American War and had a deep and abiding dislike of all things Spanish. 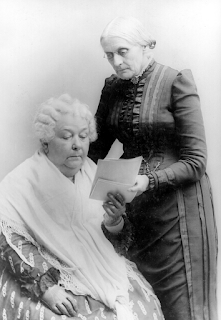 Dear ol' Liz had a keen legal mind and a way with words.

When the 14th and 15th Amendments were passed, she argued that their language applied to women as well, but the male-controlled government did not agree.

Though her popularity swung wildly between "influential icon" and "embarrassing zealot," she never let her other people dictate her views. She never sold out. She never gave up.

Elizabeth lectured and published widely throughout her life. She died in 1902, 18 years before women could vote, yet still she persisted and never let her fire burn out.
Posted by Ami Hendrickson at 9:00 AM