A note from Ami: My friend, Denise Fournier, is getting her certification in Early Childhood Education. One of her class requirements was to write about one of her heroes in early childhood education. She chose Joan Ganz Cooney.

Today, as Sesame Street celebrates its 48th birthday, I got Denise's permission to post her paper here: 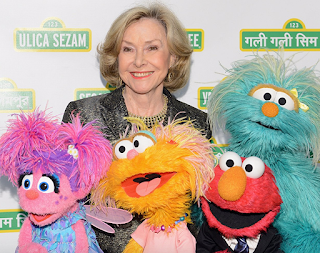 Joan was born in Phoenix, Arizona, in 1929. She was the youngest of three siblings and was born in an upper middle class family. Her parents were Sylvan, a banker, and Pauline, a homemaker.  She attended Dominican College before transferring to University of Arizona.  She wanted to major in acting but her father did not think this was an acceptable major so instead she studied education because being a teacher was considered an acceptable career for women in those days. She graduated in 1951 and began working as a typist for the state department.

She worked here for a few years before taking a job as a reporter and later a job as a publicist.  While doing this she became involved with educational television.  This topic really interested her and she was surprised to learn it existed.  She later became a producer and produced a number of educational programs.  In the winter of 1966 while hosting a dinner party, Joan and some friends discussed the possibility of creating an educational television program for preschool aged children.


Sesame Street premiered on November 10, 1969 and took the nation by storm.  Children’s television existed at this time but never before had their been a show like this that not only entertained children but also set out to educate them and to help children be prepared for school.  Studies done over the last 35 plus years have shown that children ages 3-5 who watch Sesame Street come to school ready to learn and already knowing many skills that they had not previously knew before Sesame Street premiered.  Teachers have actually had to change how they approach teaching young children due to Sesame Street.

I really feel that Joan Ganz Cooney is an early childhood heroine.  She pioneered something that didn’t exist at her time during a time when women were often not taken seriously.  She saw a need and was not afraid to speak up and point out that need to people who were in control of television and its programs. She revolutionized the way young children view television. Sesame Street prepares children, especially low-income children, for school in a way that no show ever had before. Of course we have educational programs galore now but nothing will ever compare to Sesame Street.
Sesame Street is a show that recognizes that the world is full of all sorts of types of people and these people are featured on the show at any given time.  There are people with special needs, people with various different ethnicities and cultures and families of all different kinds on Sesame Street. Children can always find someone that they can relate to.  When children feel they can relate they are more likely to be receptive to the lessons that are being presented to them.  This and many other things makes Sesame Street an awesome show and makes Joan Ganz Cooney a true early childhood education heroine.
Posted by Ami Hendrickson at 1:25 PM

You are!
Thank you for letting me use your paper and share it. :)