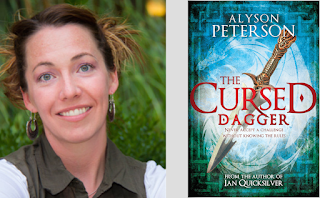 This week, Alyson kindly agreed to an interview in which she discusses the special challenges of writing a book series.

Q. What things must a writer keep in mind when writing Book I of a series, as opposed to a stand-alone book?

A. It's good to remember that whatever you put into one book has the potential to spill over into other books. One thing I struggle with when starting a new series is planning out what is key to future books. Half the time I don't know where a certain element is going until I am nearly done writing. I keep careful notes on where I want my characters to go so I don't end up putting a scene or a character in that doesn't fit the series as a whole.

Q. What challenges must be addressed when writing additional books in a series?

A. My biggest fear is that I will write a sequel that is boring. I'm always having to top the previous book, make it more exciting, more interesting etc. What I absolutely DON'T want to do is repeat the exact same story line over and over again. Keeping the story fresh while not sacrificing the personalities of my characters is my biggest hurdle.

Q. What are some tips for avoiding an info-dump in books that fall later in a series while bringing readers up to speed on what happened in earlier books?

A. I HATE info dump.  It makes stories sluggish. I read a lot of YA series. I take a highlighter pen to the books that don't info dump and study what the author did to keep the reader interested at the same time as they bring the reader up to speed. Bringing up past experiences in dialogue both internal and verbal help the reader know what's going on without a page an a half of super boring backstory.

Q. What advice do you have for keeping a character fresh and growing through a series of books?

A. Characters learn and grow much like their real life counterparts. I compile a list of characteristics and then order them by importance to the character. Minor characteristics can change, but the major ones can not. Ian's loyalty, snarkiness, bravery and deep sense of mercy is key to his story. Minor flaws can be altered, like Ian's awkwardness, immaturity and willingness to ignore difficult situations.

Writing young adult characters are my favorite because their personalities are not fully developed at 14, 15, and 16 and giving them experience and growth keeps them fresh on the page.

Q. How can you know if that book you are writing has series potential?

A. My brain rarely works in stand alone novels. I wish it would, but once I get cranking on a book, plans for future books start sneaking in. I am defective that way. If writing a character keeps me up at night and all day I'm thinking about what I want to do in book two, three and four, I've got a solid series on my hands.

Q. What suggestions do you have for writers who are pitching what they hope is the first in a series?

A. Make sure book one grabs your reader's attention. Not just grabs, but holds and makes them beg for more. You've got to have a solid hook so that when you pitch book two, you generate more excitement.

It's hard to sell certain publishers and agents on series, but good pubs and agents know the value of a well written series and can sell it as such. Pitch to your friends, hash out story line with an experienced writer or someone who understands and loves a good storyline and bounce ideas off them. You can tell a lot about how well your story is developed by the level of excitement you receive from honest reviews.

Q. As you worked on Books II and III, did anything about your characters or your story surprise you?

A. Ari went through the biggest change with her personality. She was pretty quiet in book one, but the more I got to know her she really blossomed on the page. Marvin had a lot more to say in book two that I enjoyed writing. Corbin is still Corbin and he is a stick in the mud when it comes to his personality, but I also found in him a core of genuine loyalty that I was happy to see. The story exploded in my face as I was writing book three. I thought I had firm idea on who my warriors were going to be and the type of fighters they were, but I was so very wrong. As I wrote the story and re-read passages from books one and two, book three became harsher and more absolute. That was very unintentional.

****
The Cursed Dagger is newly released from Cedar Fort. Be sure to watch for Book III of the adventures of Ian Quicksilver in 2017!
Posted by Ami Hendrickson at 1:16 PM

Email ThisBlogThis!Share to TwitterShare to FacebookShare to Pinterest
Labels: book series, Q and A, writing advice, YA, YA literature