How to Have a Successful Book Launch: 5 Simple Steps

I spent this past weekend in Utah with the amazing Alyson Peterson, as she launched her debut middle-grade fantasy, Ian Quicksilver: The Warrior's Return, into the world. (I don't always travel halfway across the country when people's books launch. But Alyson said some really nice, mostly true, things about me in her Acknowledgements, and her husband makes excellent chocolate chip cookies, so... you know.)

Launching a book can cause a new author any number of sleepless nights and Xanax prescriptions. A veritable Who's Who of Worrisome Thoughts can threaten to monopolize one's internal dialogue:

"I just write stories. I have no platform."

"All the bookstores in the state will look at the sales figures from the launch. If it doesn't go well, they won't stock my book." 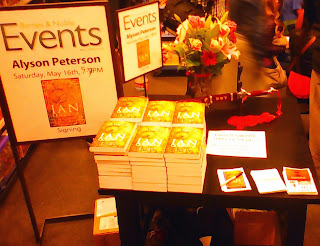 and the bete noir:

Alyson's launch was very successful: people came out in droves, she signed books for two hours' straight, and the bookstore manager was full of enthusiastic kudos when it was all over. Here's how she did it -- and how you can, too.

For weeks before the event, Alyson handed out invitations to friends and family, asking them to come and be a part of it.

Did everyone invited come? No. But many did. And they'd told people, who had told people...

Key Takeaway -- Remember: you're not begging people to buy your book. No one responds favorably to begging. Instead, you are inviting people to an event. And who doesn't love a party?

In Alyson's book, Ian, the main character, discovers he is a member of an alien warrior race. He has a magical sword and he must learn how to use it. While researching swordfighting, Alyson began studying Mixed Martial Arts.

During the launch, Alyson had a katana sword on display. Every book purchased during the event got an entry in a drawing for the sword. At the end of the launch party, the lucky winner was announced.

But that wasn't the only reason for people to show up. Since learning the skills that make one a warrior is an integral part of the book's plot, Alyson decided to stage an event that illustrate those skills in action. She invited the members of her dojo to put on a demonstration at the launch.

Drumming! Shouting! Back flips and handsprings! Swordplay! Board breaking! What a way to bring in a crowd. The Barnes & Noble cafe had never seen the like!

Seriously. Have munchies. People will stay and chat if they're eating. Give them something to nibble on.

4.) Support others and they'll support you.

I happen to believe that a big part of being a successful author is supporting others who are climbing the same publishing ladder I am. That's one of the reasons I hopped on a plane and flew 1500 miles from home this weekend.

Later, Amy returned the favor. Because authors are awesome that way.

Key Takeaway: Your writing career is not a sprint; it's a marathon. Surround yourself with people running in the same race. Encourage them to keep on keeping on.

5.) Be genuine and be grateful. 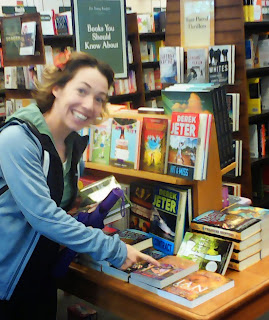 Thank the people for coming. Be happy to be there. Do not complain about how long it took you to find a publisher or an agent, or about the weather, or about the bookstore staff.

There will be snafus. You will forget a pen. Or tape. Or your posters will have a typo. Or the information in the ads announcing the event will be incorrect. Suck it up and soldier on.

Realize that every single person who attends could be doing something else -- mowing the lawn, watching "Entourage" reruns, finding a cure for recurring bunions. Everyone leads busy lives. The mere fact that people take the time out of theirs to attend your book launch should put tears of gratitude in your eyes and a song in your heart. Thank everyone who comes, whether they buy your book or not. And mean it.

Bonus Tip: If all else fails, wield a big stick.
Though Alyson had no intention to do a demo herself, her sensei had other plans. With her two boys behind her, Alyson showed she knows what she's writing about.


Key Takeaway: This is your book launch! You worked hard for this moment. Enjoy it! Have some fun and make it an event to remember.

Posted by Ami Hendrickson at 2:51 PM

It was a rocking good time!! I am ready for a repeat!!

Yesh! A repeat performance is in order! Looking forward to IQ II! :)