MuseInks welcomes Julianne Snow, zombie expert, whose new book Days With the Undead has recently been released by Sirens Call Publications. Julianne graciously answered my questions about her creative process, what she learned on the road to publication, and offers her top 5 tips for surviving a Zombie uprising...

Q: You wrote throughout Junior High and High School, but stopped writing for a long time after a teacher suggested you were better suited for other things. What happened to make you rediscover your love for writing?

A: I got sick and found that I could no longer escape into the worlds that others were creating for me. Losing that outlet and having to live in my own head for quite some time brought all of the worlds and stories that I had succeeded in suppressing bubbling back up to the surface.

Throughout my illness, I formed the backbones to characters and plot lines and once I could see my computer screen again, there was no holding me back.


Q: What is your writing process? Describe an ideal writing day.

A: My ideal writing day would consist of me getting in the groove. Some days I hit it and some days I don’t. It’s that flow of words that come out of your effortlessly where each sentence makes the same sense that it did in your head. I’m a very easily distracted person so I need to space where I can shut out the world. I turn my cell phone alerts off and grab my iPod and let the words take me away.


Q: What is the most difficult thing about writing and preparing a book for publication? What did you learn this time around that you'll apply to your next book?

A: I think it’s the editing process. Each word that you write is yours. You don’t want to cut them – you wrote them therefore they must be important. I’ve learned the lesson that sometimes, less is more. Sure, I could spend three paragraphs telling you all about lemonade but what difference does lemonade make in a story about the Undead? It’s better to save those words for a time when they are needed and will offer the biggest bang for their weight.


Q: Your book began as a National Novel Writing Month (NaNoWriMo) project. How does the finished version differ from the NaNoWriMo book? What sorts of edits, expansions, or alterations have occurred along the way?

A: My vision started to return a few days prior to NaNoWriMo 2010 (it wasn’t until January 2011 that I really started to notice that I had regained a significant portion of my sight). I still couldn’t see more than 10% in any direction from my central frame of reference but I sat down and let the story pour out of me. I had been developing it in my head, along with a few other novels that I want to write, so once I was able to see enough of the computer screen to type, it took shape and a life of its own.

The finished version is not necessarily longer - though technically it is - but there was a lot that I cut out of the first draft and then more that I added in for the third draft. The alterations have mainly been to take out the accessory fluff that didn’t serve a purpose to the story while the additions enhance the final product.


Q: Your first book, Days with the Undead, has just been published by Sirens Call Publications. What was your road like to finding a publisher? 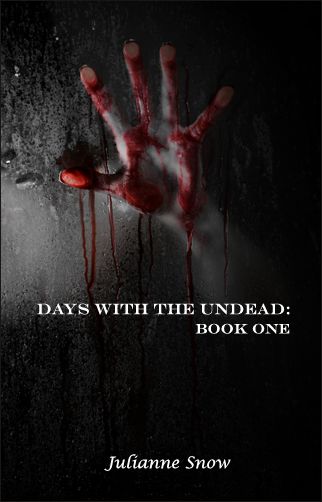 A: I sent my manuscript out to Sirens Call Publications first since I knew one of their founders was an avid follower on my blog. After doing a little research and talking to them about their approach, I knew that I wanted to work with them.

Given the fact that all of the founders are also indie writers, they knew what I was facing in wanting to publish my first book and were willing to put the weight of their collective talents behind both it and me.  They offer a wealth of information that they are willing to impart, and that made me feel good about publishing with them. Knowledge is a heady commodity in this industry, and the team over at SCP has it in spades!


Q: So, you're a Zombie expert! What are your top tips for surviving a Zombie uprising? What 5 things should be in everyone's survival bag & why?

A: My top five tips for surviving the Zombie Apocalypse are: 1.) don’t wait once it all goes down, 2.) avoid the Undead at all costs, 3.) observe them whenever you can and never assume that they will do what you think they will do, 4.) keep moving, 5.) don’t dismiss the power of your own two feet for traveling, and 6.) remember that not everyone is going to be your friend. Okay, that’s six, but they are all important.

What are the five things that everyone should have in their survival bag? Duct tape, waterproof matches, bottled water or something to boil water in for purification, protein bars, and a weapon of some sort (you need to choose what will work best for you).


Q: What 3 books do you consider essential Zombie-genre reading? Why?

A: 1. The Zombie Survival Guide by Max Brooks – not only is it a guide to help you survive but it contains a great story as well.

2. Herbert West – Reanimator by HP Lovecraft – it’s a classic and helped me to develop such a love of the genre that anyone that holds a special place in their hearts for Zombies should give it a read.

3. Monster Island by David Wellington – it’s a fantastic read and a concept that is so fresh you feel like you’re reading more than a Zombie tale.


Q: How involved are you in the marketing plans for your new book? What advice would you give to a new author about marketing and promotion?

A: Absolutely involved, which is just how I wanted it to be. The best thing that I can say is to find a way to promote your book and be yourself about it. Don’t just tweet links to your book and ask people to buy it – find a way to draw them in and make them want to read it.

Another big thing is to support the community that you are a part of; read other Indie authors and take the time to review their books once you’ve read them.


Q: What will be your next project? What can readers and fans expect from your next book?

A: My next book will likely be the second book in the series – I have so much more to explore in the world that I have created so it’s going to be a project that I will be working on for some time. The next book will continue right where the first book left off and let me tell you, there are some crazy things afoot.

I do have plans to write other books and I’m always submitting short stories to anthologies so you will be seeing more of me. Writing is my passion and now that I have reclaimed it for my own, I’m not about to let it go.

It was watching Romero's Night of the Living Dead at the tender age of six that solidified Julianne Snow’s respect of the Undead. Since that day, she has been preparing herself for the (inevitable) Zombie Apocalypse. While classically trained in all of the ways to defend herself, she took up writing in order to process the desire she now covets; to bestow a second and final death upon the Undead.


As the only girl growing up in a family with four children in the Canadian countryside, Julianne needed some form of escape. Her choice was the imaginations of others which only fostered the vibrancy of her own.

Days with the Undead: Book One is her first full-length book, the basis of which can be found in her popular web serial of the same name. You can find Julianne’s The Living Dead of Penderghast Manor in the anthology Women of the Living Dead and stories in upcoming anthologies called Childhood Nightmares: Under The Bed and Twisted Realities: Of Myth and Monstrosity from Sirens Call Publications.
Posted by Ami Hendrickson at 6:00 AM