Tales From the World Steam Expo

My family, a friend, and I spent Memorial Day weekend at the http://www.worldsteamexpo.com/ in Dearborn, surrounded by all manner of people who happily put their normal lives on hold in order to dress up in top hats, corsets, bustles, leather, feathers, & brass.  We spent four days feeling geeky nostalgia for an era that never was -- but should have been.

(Thanks to Arty Dawg for taking this pic of me, Wunderhusband & Kelly & graciously allowing me to use it.  See more of his Steampunk pics from the weekend.)

When I told people where we were going, I discovered that I had to speak slowly and enunciate clearly: "Steam. Punk. Con."

This still generated blank looks, which led to a rather inarticulate (on my part) explanation of what steampunk was, what a Con was, and why I would be interested in attending any such event.

The blank looks sometimes -- but not always -- shifted to veiled "I've-always-thought-you-were-insane-and-now-you've-verified-it" expressions.  Or they stayed blank.

Finally, I started telling people that we were taking our daughter to Henry Ford Museum over the weekend, which elicited smiles, nods, and no askance glances whatsoever.

We had a ball.  Here in no particular order, are the Top 10 Things I enjoyed about attending the Con:

1. Seeing My Husband in a Whole New Way 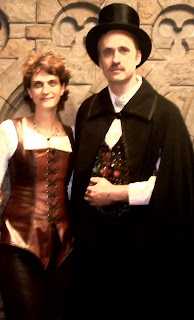 My guy in a vintage top hat & cape = Mmmmmmm!  Such class!  Such presence!  So glad I got to go home with him!

2.  Playing Dress-Up
Corsets & bustles, bloomers & boots, silk & satin, brass & leather.  We mixed and matched our costumes, creating new combinations all weekend.  We swished and sashayed with bellydancing belts at our hips.  We made bustles out of curtains and tractor cogs.  We improvised slips into skirts.

When it was time to eat, we stayed in costume while patronizing restaurants in the Real World.  Because dressing up is more than half the fun!


3. Dancing on Stage with Tartanic
Our friend Kelly is a big Tartanic fan.  In fact, the fact that they were playing at the Con was one of the main reasons she went.  She got to be Tambourine Girl for Monday's concert.  She went up on stage with the band and played for awhile...  Doesn't she look like she's having a ball? 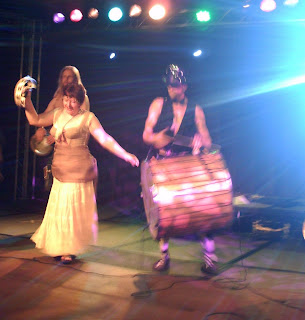 Then Adrian issued a general invitation to the crowd, so we rushed the stage and boogied through a way cool drum solo.  Can't say that I've ever been on stage in leather before.  It was a blast!

4.  Going Back in Time...
...at the Henry Ford Museum.  We saw biplanes and steam trains.  We looked at ancient bicycles, carriages, and cars.  We watched a century-old steam engine fire up (with compressed air) to turn a monstrous 24-foot fly wheel.  And we spent an afternoon surrounded by machines built before computers -- when as much architectural attention was given to aesthetics as to efficiency.  Some of the machines we saw were things of beauty.  So it only follows that they are destined to be joys forever.

On Monday, we were treated to an antique airshow right over our hotel.  Very cool indeed.

5.  Teeny Tiny Top Hats
Teeny tiny top hats were everywhere.  We all liked them (Kelly had made her own and wore it proudly), but the 7 year-old in the group loved them.  We attended a T3Hat how-to workshop, where we came up with all kinds of design ideas for our own projects.  I'm envisioning a summer of T3Hat creations on my daughter's part. 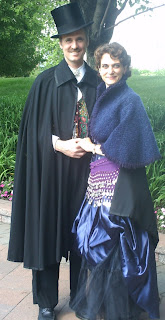 From steampunk Boba Fett to "the Guy with the Cool Wings," from floor-length brocade gowns with full bustles to daring leather micro-minis, the Con provided a never-ending parade of fascinating costumes and characters.  Ostrich feathers in frilly taffeta!  Giant Mad Hatter-inspired top hats!  Brass bazookas with nifty light-up power-packs that were at once retro & futuristic!  Leather shoulder braces for Wild-West style artilery!  And goggles of all shapes and styles!  One of the best places to be was in the hotel lobby, just to see the creativity of the people who attended. 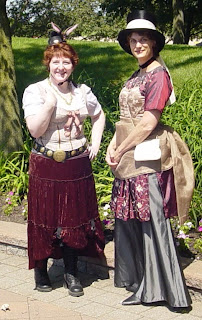 "Not really," I told her.  "Most of the people I've met have been with the Con.  I'm pretty tame compared to some..."

7.  Flat-Out Fun Concerts
Tartanic, of course, was cool.  How can one not love performers who are so obviously having the time of their lives up on stage?  But I liked Abney Park as well -- and my daughter really liked their concerts.

The bands played several times, were open and approachable, and were dressed just as nutty as the rest of us.  What's not to like?

8.  Dance Lessons
Kelly and I attended a session of dance lessons which, to be honest, was not period-accurate, as swing dancing was not "in" at the turn of the 20th century.  However, the teacher (who was conscripted at the last moment) was a good sport.  And it was fun to get a closer view of the various costumed gents who practiced with us in a round-robin learning session.

9.  Creative Vendors
The vendors ranged from self-published authors to antiques dealers to leather artisans to superlative seamstresses.  Each booth's merchandise invited you to try it on, heft it, polish it, look through it, or otherwise engage in a tactile experience.  Rich brocades, shimmery silks, melodious beads, redolent leathers -- all gave the vendors area a "bazaar by immersion" feel.  I tend to loathe shopping.  But much of the merchandise was handmade one-of-a-kind stuff that made browsing fun.  It was pure paradise for my shopaholic kid.

10.  Unlimited Research Opportunities
I don't write steampunk novels, but... I might.  I've been kicking around an idea.  I have the set-up, the plot, and the characters.  Even have an outline started.  There's nothing like a working vacation to submerge oneself in the genre and do what I call "lurker research." Because -- you know -- a writer is never not working!
Posted by Ami Hendrickson at 4:44 PM